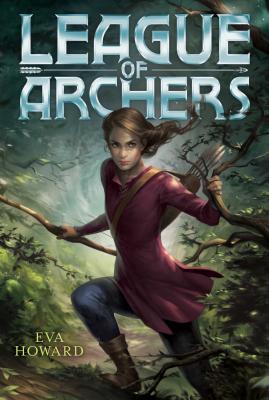 This is book number 1 in the League of Archers series.

Ellie Dray and her League of Archers are keeping Robin Hood’s legacy alive, but when Ellie is accused of Robin’s murder, she must learn what it really means to be a hero in this exciting adventure story.

Twelve-year-old novice nun Elinor Dray has always idolized Robin Hood. She and her friends try to be like him by sneaking out to hunt on the lands belonging to the village Baron, stealing from him to feed their poor neighbors. They call themselves the League of Archers.

While returning from a hunting trip late one night, Ellie meets a man in the forest—a hunter like herself. But suddenly the man is shot with a poisoned arrow. She manages to help him back to the abbey, but it’s too late and he dies. Only in his final moments, does Ellie realize that the hunter is Robin Hood, and that the abbess of the nunnery is Maid Marian.

With her secret revealed, the Baron immediately arrests Marian. But he needs a scapegoat for the murder of Robin Hood, and who better than a young novice nun? He calls Ellie a hero, but the villagers don’t agree. A mob forms, vowing to hunt Ellie down and exact their own vengeance.

Will Ellie and her League of Archers be able to find the real killer, free Maid Marian, and keep Robin Hood’s legacy intact?

Kirkus Reviews described League of Archers as a book that “doesn’t shy away from deep moral dilemmas often unexplored in middle grade novels and important to acknowledge in a story with life-or-death stakes.” And Booklist said that it was a “highly enjoyable adventure story that should appeal to a wide range of readers.”
Eva Howard is the author of League of Archers. When she’s not writing, Eva escapes the city to hike and camp in the forest—and has even tried her hand at archery. She lives in New York.
This action-packed novel combines well known characters with a new cast to create a fun, fast paced story of friendship and inner as well as outer conflict. The characters are well developed and realistically portrayed, flaws and all.
— School Library Connection March/April

Ellie and her League are a likable troupe who rise above the stereotype of
plucky urchins and learn to make tough choices about loyalty and honor. This is a highly enjoyable
adventure story that should appeal to a wide range of readers.

This book doesn't shy away from deep moral dilemmas often unexplored in middle-grade novels and important to acknowledge in a story with life-or-death stakes. . . this generally well-paced post-legend take on the Robin Hood myth will captivate action and adventure fans and lovers of historical fiction alike
— Kirkus Reviews