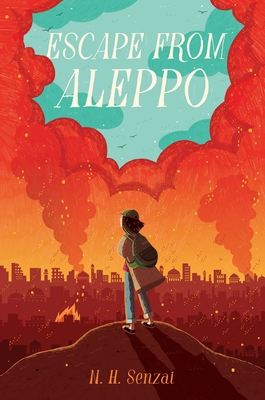 
Not On Our Shelves—Ships in 1-5 Days
“Filled with kindness and hope…Heartbreaking…Necessary.” —Booklist (starred review)

Nadia’s family is forced to flee their home in Aleppo, Syria, when the Arab Spring sparks a civil war in this timely, “harrowing” (Publishers Weekly) coming-of-age novel from award-winning author N.H. Senzai.

Nadia stands at the center of attention in her parents’ elegant dining room. This is the best day of my life, she thinks. Everyone is about to sing “Happy Birthday,” when her uncle calls from the living room, “Baba, brothers, you need to see this.” Reluctantly, she follows her family into the other room. On TV, a reporter stands near an overturned vegetable cart on a dusty street. Beside it is a mound of smoldering ashes. The reporter explains that a vegetable vendor in the city of Tunis burned himself alive, protesting corrupt government officials who have been harassing his business. Nadia frowns.

It is December 17, 2010: Nadia’s twelfth birthday and the beginning of the Arab Spring. Soon anti-government protests erupt across the Middle East and, one by one, countries are thrown into turmoil. As civil war flares in Syria and bombs fall across Nadia’s home city of Aleppo, her family decides to flee to safety. Inspired by current events, this novel sheds light on the complicated situation in Syria that has led to an international refugee crisis, and tells the story of one girl’s journey to safety.
N. H. Senzai is the author of the acclaimed Shooting Kabul, which was on numerous state award lists and an NPR Backseat Book Club Pick. Its companion, Saving Kabul Corner, was nominated for an Edgar Award. While her first two books are based in part on husband’s experience fleeing Soviet-controlled Afghanistan in the 1970s, her third, Ticket to India is based on her own family’s history. She is also the author of Escape from Aleppo. Ms. Senzai lives with her family in the San Francisco Bay Area. Visit her online at NHSenzai.com.