Snowman: The True Story of a Champion (Paperback) 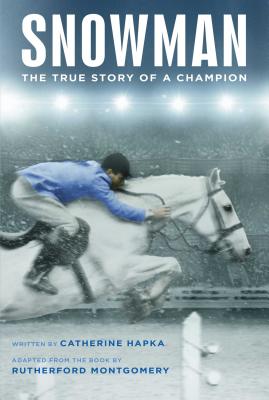 Snowman: The True Story of a Champion (Paperback)

By Catherine Hapka, Rutherford Montgomery (From an idea by)


Not On Our Shelves—Ships in 1-5 Days
A twist of fate brings a man and horse together in this remarkable true story now available in a new version adapted by the author of the Marguerite Henry’s Ponies of Chincoteague series.

Snowman, an Amish plow horse, was bound for the meat market when Harry deLeyer, a Long Island riding instructor, spotted him at auction. After making eye contact with the gentle giant deLeyer decided to purchase him for $80.

At first, Snowman was just a horse that children rode during lessons, but when deLeyer sold him to a neighbor, the horse had other ideas. He would jump the high fences so he could return “home.” Harry then began training Snowman as a show jumper. Less than two years out of the plow fields, Snowman won the 1958 horse show jumping Triple Crown—the American Horse Shows Association Horse of the Year, Professional Horseman’s Association Champion, and Champion of Madison Square Garden’s Diamond Jubilee.

Snowman was inducted into the Show Jumping Hall of Fame in 1992.
Catherine Hapka has written more than 100 books for children and adults. She’s written for series as a ghostwriter and has also authored original titles. She lives in Pennsylvania.

Rutherford George Montgomery (April 12, 1894–July 3, 1985) was the author of many books about animals, worked as a scriptwriter for the Walt Disney Studios, and taught creative writing.