From Twinkle, with Love (Paperback) 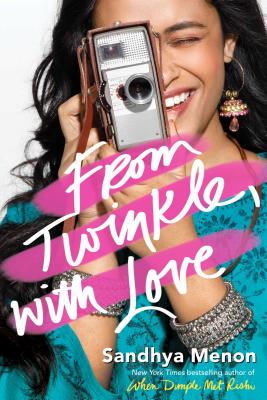 From Twinkle, with Love (Paperback)

“This story captures that moment at the movie theater when your date touches your hand in the dark while knocking the popcorn over in the loudest way possible—it’s cute and exciting, but also slightly embarrassing. Sandhya has crafted another excellent teen romance about a shy and ambitious young woman trying to show the world her passion and talent. A fantastic summer read!  ”
— Jessica Palacios, Once Upon a Time, Montrose, CA

Three starred reviews for this charming romantic comedy about an aspiring teen filmmaker who finds her voice and falls in love, from the New York Times bestselling author of When Dimple Met Rishi.

Aspiring filmmaker and wallflower Twinkle Mehra has stories she wants to tell and universes she wants to explore, if only the world would listen. So when fellow film geek Sahil Roy approaches her to direct a movie for the upcoming Summer Festival, Twinkle is all over it. The chance to publicly showcase her voice as a director? Dream come true. The fact that it gets her closer to her longtime crush, Neil Roy—a.k.a. Sahil’s twin brother? Dream come true x 2.

When mystery man “N” begins emailing her, Twinkle is sure it’s Neil, finally ready to begin their happily-ever-after. The only slightly inconvenient problem is that, in the course of movie-making, she’s fallen madly in love with the irresistibly adorkable Sahil.

Twinkle soon realizes that resistance is futile: The romance she’s got is not the one she’s scripted. But will it be enough?

Told through the letters Twinkle writes to her favorite female filmmakers, From Twinkle, with Love navigates big truths about friendship, family, and the unexpected places love can find you.
Sandhya Menon is the New York Times bestselling author of When Dimple Met Rishi, Of Curses and Kisses, and many other novels that also feature lots of kissing, girl power, and swoony boys. Her books have been included in several cool places, including the Today show, Teen Vogue, NPR, BuzzFeed, and Seventeen. A full-time dog servant and part-time writer, she makes her home in the foggy mountains of Colorado. Visit her online at SandhyaMenon.com.
PRAISE FOR FROM TWINKLE, WITH LOVE

“Delightful, inspiring, and the hug your heart most certainly needs.” —Book Riot

PRAISE FOR WHEN DIMPLE MET RISHI

“Get ready to fall in love with Dimple Shah and Rishi Patel.” —HelloGiggles

“The strength of the story comes from its blending of Indian culture and values into a modern-day romance that scores of readers can enjoy.” —School Library Journal

“Nuanced and thoughtful . . . will melt the hearts of readers.” —Booklist