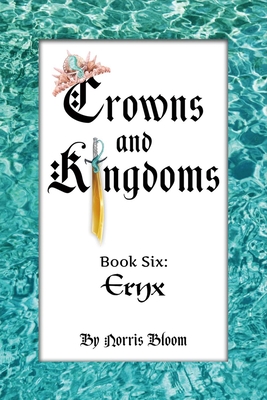 This is book number 6 in the Crowns and Kingdoms series.

Young Nikolette arrives at the beautiful sea kingdom of Eryx and happily adjusts to her life as a princess. But Nikolette's carefree days as a princess are cut short when her grandfather passes on to the Isle of the Buried and Nikolette becomes the ruling queen of Eryx.

Nikolette faces her biggest challenge when she discovers that evil King Iodoc has plans to invade her peaceful sea kingdom. How can Nikolette keep her people safe and keep King Iodoc from landing on the shores of Eryx?

In addition, Nikolette suspects she has discovered some startling news about her family, the royal family of Eryx who perished at sea many years ago. But if Nikolette shares her suspicions, will people think she is not of sound mind--or worse, away with the faeries? Worse yet, would the people of Eryx question Nikolette's ability to rule their kingdom?
Norris Bloom is a retired school teacher and basketball coach. She taught 5th grade and 6th grade in the United States before relocating to Upper Basildon, England for 6 years where she developed a love of the English countryside and its people. Additionally, she traveled extensively throughout Europe, feeling a kindred spirt to the long ago kings and queens that once roamed the castles found in all the ancient kingdoms.