Don't Judge a Girl by Her Cover (Gallagher Girls #3) (Paperback) 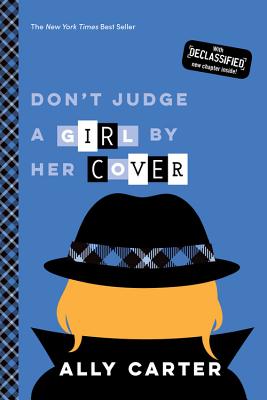 Don't Judge a Girl by Her Cover (Gallagher Girls #3) (Paperback)

This is book number 3 in the Gallagher Girls series.

Friendship. Romance. Espionage. The Gallagher Academy for Exceptional Young Women is no ordinary boarding school. Don't miss a moment of the New York Times bestselling series-now with a bonus epilogue!

When Cammie Morgan visits her roommate Macey in Boston, she thinks she's in for an exciting end to her summer. After all, she's there to watch Macey's father accept the nomination for vice president of the United States. But when you go to the world's best school (for spies), "exciting" and "deadly" are never far apart. The girls suddenly find themselves trapped in a kidnapper's plot, with only their espionage skills to save them.
Soon Cammie is joining Bex and Liz as Macey's private security team on the campaign trail, where they struggle to answer the questions Who is after Macey? And how can the Gallagher Girls keep her safe? The girls must use their spy training at every turn as the stakes are raised, and Cammie gets closer and closer to the shocking truth . . .


Ally Carter (www.allycarter.com) is the New York Times best-selling author of the six books in the Gallagher Girls series: I'd Tell You I Love You, But Then I'd Have to Kill YouCross My Heart and Hope to SpyDon't Judge a Girl by her CoverOnly the Good Spy YoungOut of Sight, Out of Time and United We Spy as well as Heist Society, Uncommon Criminals, and Perfect Scoundrels. Ally lives in Oklahoma where she is hard at work on her next novel.
* "These girls remain the most awesome, kick-butt teens ever, but now readers are also getting a glimpse at what makes them vulnerable...This reviewer loves the series, enjoyed this book, and is struggling to wait for the next one."—VOYA, starred review

PRAISE FOR I'D TELL YOU I LOVE YOU, BUT I'D HAVE TO KILL YOU

"Readers will eagerly anticipate the next installment."—Publishers Weekly

PRAISE FOR CROSS MY HEART AND HOPE TO SPY

"It is difficult to imagine what teen girl would not want to read-and reread-this second book in a butt-kicking series."—VOYA

PRAISE FOR ONLY THE GOOD SPY YOUNG

PRAISE FOR OUT OF SIGHT, OUT OF TIME

* "This episode is nearly three hundred pages of perfection, and the only regret fans will have when they are done is being one step closer to the final installment of this outstanding series."—VOYA, starred review

PRAISE FOR UNITED WE SPY