Out of Sight, Out of Time (Gallagher Girls #5) (Paperback) 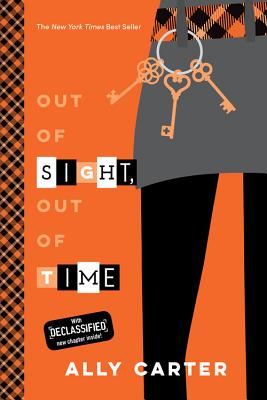 Out of Sight, Out of Time (Gallagher Girls #5) (Paperback)

This is book number 5 in the Gallagher Girls series.

Friendship. Romance. Espionage. The Gallagher Academy for Exceptional Young Women is no ordinary boarding school. Don't miss a moment of the New York Times bestselling series-now with a bonus epilogue!

The last thing Cammie Morgan remembers is leaving the Gallagher Academy to protect her friends and family from the Circle of Cavan-an ancient terrorist organization that has been hunting her for over a year. But when Cammie wakes up in an alpine convent and discovers that months have passed, she must face the fact that her memory is now a black hole. The only traces left of Cammie's summer vacation are the bruises on her body and the dirt under her nails, and all she wants is to go home.

Once she returns to school, however, Cammie realizes that even the Gallagher Academy now holds more questions than answers. Cammie, her friends, and mysterious spy-guy Zach must face their most difficult challenge yet as they travel to the other side of the world, hoping to piece together the clues that Cammie left behind. It's a race against time. The Circle is hot on their trail and willing stop at nothing to prevent Cammie from remembering what she did last summer.
Ally Carter (www.allycarter.com) is the New York Times best-selling author of the six books in the Gallagher Girls series: I'd Tell You I Love You, But Then I'd Have to Kill YouCross My Heart and Hope to SpyDon't Judge a Girl by her CoverOnly the Good Spy YoungOut of Sight, Out of Time and United We Spy as well as Heist Society, Uncommon Criminals, and Perfect Scoundrels. Ally lives in Oklahoma where she is hard at work on her next novel.
* "This episode is nearly three hundred pages of perfection, and the only regret fans will have when they are done is being one step closer to the final installment of this outstanding series."—VOYA, starred review