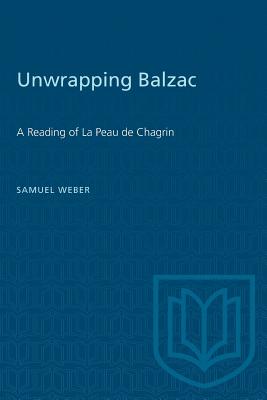 This radically new reading of La peau de charin presents a case for Balzac as a modern rather than a traditional, realist writer. Using the principles and languages of Marx, Derrida, Freud, Barthea, and others who have contributed to a redefinition of modern criticism, Samuel Weber presents a detailed and intricate explication of the text that challenges all standard interpretations of the novel.

Traditional readings of La peau de chagrin, and of Balzac in general, have pursued a message in the novel, a reality beneath the allegory. Weber demonstrates that Balzac's text can be grasped both as a mise en sc ne and as a play of representations that reflects no original truth, reality, or meaning beneath the text to which the representation can be referred and by which they can be authenticated. To unwrap Balzac in this manner is to discover that there is no thing inside, that there is only the 'wrapping.'

Weber's conclusions are not only startingly original, but they also solve problems which have puzzled traditional readers of the novel since the earliest commentators of 1831. Unwrapping Balzac is a brilliant tour de force that will create controversy among Balzac scholars for years to come.