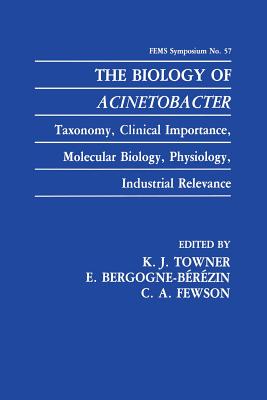 
Not On Our Shelves—Ships in 1-5 Days
The 1st International Workshop on Acinetobacter was held on 6th September, 1986, in Manchester, England, in association with the 14th International Congress of Microbiology. That occasion was so well attended and productive that there were soon discussions about how, when and where the next meeting should be held. This time, however, there was sufficient confidence to think of a more substantial meeting and to plan for the proceedings to be published. It emerged that there was wide agreement that the time was ripe to take stock of the entire biology of Acinetobacter: its occurrence and taxonomy; its molecular biology, biochemistry and physiology; its clinical importance and its industrial and commercial applications. The 2nd International Workshop on Acinetobacter took place from 6th to 7th September, 1990, at the Institut Pasteur, Paris, and was sponsored by the Federation of European Microbiological Societies. There were about 100 participants from 19 countries. The backbone of the meeting consisted of 23 plenary lectures. There were 28 posters and the meeting closed with a general discussion which went on long after the official finishing time despite all the counter-attractions of a sunny Parisian Friday afternoon. Indeed discussions continued while cruising along the Seine and while dining at the top of the Tour Montparnasse. However, the vitality and usefulness of even the most successful meeting is difficult to transmit by the printed word.