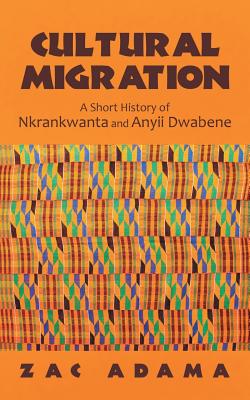 
Not On Our Shelves—Ships in 1-5 Days
(This book cannot be returned.)
Around the end of the seventeenth century, the Anyii Dwabene-an Akan tribe originally located in the Amansie area of present-day Ghana-leave their homeland to found a new kingdom at Dadieso, also in Ghana. But the Anyii Dwabene become liberators when they intervene in a war to save the kingdom of Abron Bondoukou. Eventually, they establish a new home and a new kingdom with capital at AnyiniBileKro, in what is now Cote d'Ivoire. Later, a section of Anyii Dwabene resists French colonialism and leaves to found a settlement across the border in the then Gold Coast, calling it Nkrankwanta. The story of Nkrankwanta is a story of freedom and liberty. In Cultural Migration-A Short History of Nkrankwanta and Anyii Dwabene, author Zac Adama is privileged to share the oral history of Nkrankwanta in the print form for the first time. Exploring the lives of the first immigrants of Nkrankwanta-men and women who chose danger and uncertainty over servitude and complacency-it is the story of a people who explored the unknown for new possibilities and opportunities, and who wanted their story to be told to generations after them. Not only a book of history, Cultural Migration-A Short History of Nkrankwanta and Anyii Dwabene explores a comparative linguistic study between Akan Twi-Fante, spoken mainly in Ghana, and Akan Anyii-Baule, whose majority speakers live in neighbouring C te d'Ivoire. The story of Nkrankwanta is essentially a story of migration. It is partly the story of a people who liberated others and, in turn, required assistance when they were faced with imminent danger. The story of Nkrankwanta speaks to the human heart-it portrays the changing fortunes in the lives of a people who have, with each step along the way, been purposeful and determined.