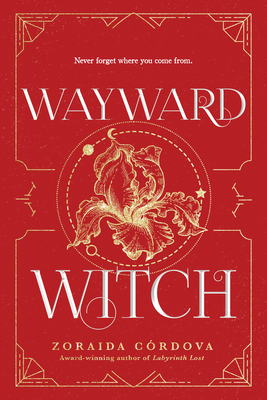 This is book number 3 in the Brooklyn Brujas series.

From the author of The Inheritance of Orquídea Divina:

The witches of New York are back! In the epic conclusion to the award-winning series, the final Mortiz sister's story is told. Infused with Latin American tradition—the Brooklyn Brujas series follows three sisters—and brujas—as they develop their powers and battle magic in their hometown and worlds beyond.

Rose Mortiz has always been a fixer, but lately she's been feeling lost. She has brand new powers that she doesn't understand, and her family is still trying to figure out how to function in the wake of her amnesiac father's return home. Then, on the night of her Deathday party, Rose discovers her father's memory loss has been a lie.

As she rushes to his side, the two are ambushed and pulled through a portal to the land of Adas, a fairy realm hidden in the Caribbean Sea. There Rose is forced to work with a group of others to save Adas. Soon, she begins to discover the scope of her powers, the troubling truth about her father's past, and the sacrifices he made to save her sisters. But if Rose wants to return home so that she can repair her broken family, she must figure out how to heal Adas first.

Perfect for those looking for:

Zoraida Córdova is the author of the award-winning Brooklyn Brujas series and The Vicious Deep trilogy. Her short fiction has appeared in Star Wars: From a Certain Point of View, and Toil & Trouble: 15 Tales of Women and Witchcraft. She is the co-editor of Vampires Never Get Old, a YA anthology forthcoming from Imprint/Macmillan in fall 2020. Her upcoming YA novels include Star Wars: A Crash of Fate, and Incendiary, book one in the Hollow Crown duology (Disney/Hyperion 2020). Zoraida was born in Ecuador and raised in Queens, New York. When she isn't working on her next novel, she's planning her next adventure.
"Córdova yet again executes a wholly satisfying combination of deft characterization and cinematic world building." — The Bulletin of the Center for Children's Books

"Infusing her story with Latinx traditions and characters, Córdova beautifully wraps up the series through the self-assured narration of a 15-year-old girl who finds herself as she learns to control her powers. Readers new to the series will find the book easy to follow and discover much to love in the immersive, diverse world of the close-knit Mortiz family." — Kirkus Reviews

"Córdova interweaves details of the brujería and Latinx culture that will resonate with fans and intrigue newcomers...this latest entry is full of surprises, as well as the meticulously detailed creatures and settings that series fans have come to adore." — Booklist