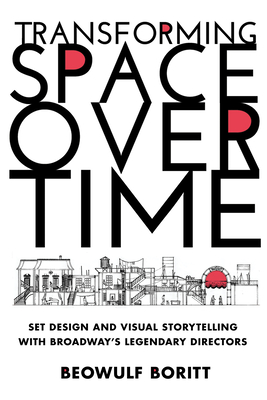 
Not On Our Shelves—Ships in 1-5 Days
Transforming Space over Time tells the stories of six diverse productions: five on Broadway and one Off Broadway. Tony Award-winning set designer Beowulf Boritt begins with the moment he was offered each job and takes readers through the conceptual development of a set, the challenges of its physical creation, and the intense process of readying it for the stage. Theater is at heart a collaborative art form, and Boritt shares revealing details of his work with the many professionals--directors, designers, technicians, producers, stage managers, and actors--who contribute their talent and ideas to each show. Included here are extensive conversations with theater legends James Lapine, Kenny Leon, Hal Prince, Susan Stroman, Jerry Zaks, and Stephen Sondheim, explaining how their different approaches to theater help to shape the vision for a set and best practices for creative collaboration. Boritt also offers valuable insights into the sometimes frustrating but unavoidable realities of the "biz" part of showbiz--budgets, promotion, reviews, and awards. Full of indispensable advice for aspiring and seasoned professionals, and with plenty of entertaining and enlightening anecdotes to engage passionate theatergoers, Transforming Space over Time peels back the curtain and illuminates the artistry and craft of professional theatrical production--and particularly the all-important collaboration of designers and directors.
Beowulf Boritt has enjoyed a twenty-five-year career in the theater and has designed more than 450 shows in New York (among them twenty-five on Broadway and more than one hundred Off Broadway), across the United States, and internationally. He has been nominated for three Tony Awards and won for his design of James Lapine's Act One. Boritt was honored with an Obie Award for Sustained Excellence in Design, among numerous other awards and nominations. He lives in New York City with his wife, actor Mimi Bilinski, and his dog Natasha Rostov.