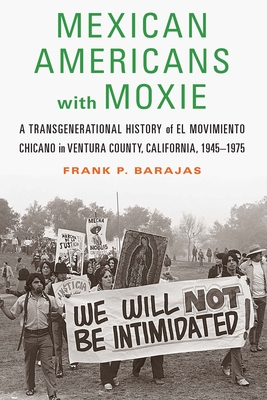 
Not On Our Shelves—Ships in 1-5 Days
In Mexican Americans with Moxie Frank P. Barajas argues that Chicanas and Chicanos of the 1960s and 1970s expressed politics distinct from the Mexican American generation that came of age in the decades prior. Barajas focuses on the citrus communities of Fillmore and Santa Paula and the more economically diversified and populated rurban municipalities of Oxnard, Simi Valley, and Ventura, illustrating Ventura County’s relationship to Los Angeles and El Movimiento’s ties to suburbanization, freeway construction, and the rise of a high-tech and defense-industry corridor. Mexican Americans with Moxie devotes particular attention to cross-cultural dynamics that transcended space and generation. The residents of Ventura County became involved with national issues such as the Vietnam War, school desegregation, labor, and electoral politics. The actions of Black students at the community colleges of Moorpark and Ventura and other area universities inspired Mexican American youth of Ventura County to assess their own activism.

Mexican Americans with Moxie situates the Chicana-Chicano movement within the nation’s struggle to achieve social justice. From this history, readers will gain a new appreciation for how leadership development spans generations and contributes to the identity formation of communities.
Frank P. Barajas is a professor of history at California State University Channel Islands. He is the author of Curious Unions: Mexican American Workers and Resistance in Oxnard, California, 1898–1961 (Nebraska, 2012).
"This book emerges from and joins a new wave of scholarly literature that challenges the larger urban city narratives of the historical construction of the Chicana/o Movement by underscoring the political salience of more suburban communities. It is sure to generate important new research on the movement. Every library should obtain a copy for collections on the Chicana/o Movement specifically and on social movements generally."—J. G. Moreno, Choice

"Mexican Americans with Moxie will undoubtedly be of use in Chicana/o studies, ethnic studies, social movement, history, twentieth-century race and ethnicity, and political science courses. Graduate and undergraduate students will find it an easy and enjoyable read. Barajas's book also serves as a reminder to today's young activists that they are part of a long trajectory of political activism."—Lorena V. Márquez, Journal of American Ethnic History

“In this heartfelt study set in Southern California’s Ventura County and particularly his hometown of Oxnard, Barajas invites readers to broaden their understanding of the Chicano movement by revealing how its spirit, élan, and, yes, moxie crossed generational lines, built broad political coalitions, and appealed to immigrants and citizens alike. With a keen awareness of how personal relationships feed political activism, Barajas captures the stories of activists like Roberto Flores, the pre-med Brown Beret who tested the local water supply for pollutants, and Rachel Murguia Wong, the first Mexican American member of the local school board who ‘passed’ as Asian her first time on the ballot. Youth, elders, liberals, militants, Mexicanos, and Chicanos all populate these pages, a tribute to the multifaceted nature of the Chicano movement. In the end, the book stands as a valuable testament to the enduring coraje (the courage and anger) of los de abajo (the suppressed) to fight for justice.”—Lorena Oropeza, author of The King of Adobe: Reies López Tijerina, Lost Prophet of the Chicano Movement

“Mexican Americans with Moxie is much more than a deeply researched local history of el movimiento. It is an impressive reassessment of the Chicano and Chicana Movement through a transgenerational approach that beautifully captures the shift in political consciousness of Mexicans and Mexican Americans. The righteous indignation of youth who battled social injustices in the schools, streets, agricultural fields, and courtrooms relied on the mentorship and guidance from the elder generation. This book is a refreshing reminder that both generations can learn from each other to make a better world for all.”—José M. Alamillo, author of Deportes: The Making of a Sporting Mexican Diaspora

“A smooth and clear contribution to Chicano movement studies. By centering the overlap between political generations, Frank P. Barajas brings us a new vision of the Chicano movement, one in which the collaborative and contested work of radicals and reformers comes vibrantly to life. This book is an important contribution to our field.”—Felipe Hinojosa, author of Apostles of Change: Latino Radical Politics, Church Occupations, and the Fight to Save the Barrio