Red Barber: The Life and Legacy of a Broadcasting Legend (Hardcover) 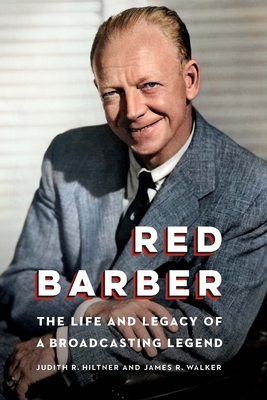 Red Barber: The Life and Legacy of a Broadcasting Legend (Hardcover)


On Our Shelves Now at:
A Booklist Top 10 Sports & Recreation Book
Finalist for the 2022 CASEY Award

Born and raised in rural Mississippi and the even balmier climes of central Florida, Red Barber, at the age of thirty-two, became one of New York City’s most influential citizens as the play-by-play announcer for the Brooklyn Dodgers. When he arrived in 1939, Barber brought the down-home drawl and idioms of his southern roots to the borough, where residents said they could walk down any street and never miss a pitch because his voice wafted out of every window and every passing car. From his colorful expressions like “rhubarb” and “sitting in the catbird seat” to his vivid use of similes—a close game was “tighter than a new pair of shoes on a rainy day”—Barber’s influence on his contemporaries and the many generations of broadcasters who followed him cannot be overstated. But behind all the base hits, balls, and strikes lies a compelling story that dramatizes the shifting expectations and roles of a public figure—the sports broadcaster—as he adapted to complex cultural changes throughout the course of twentieth-century American life.

Red Barber follows the trajectory of Barber's long career from radio and television play-by-play man for the Cincinnati Reds, Brooklyn Dodgers, and New York Yankees to his work calling college and professional football games, his nine-year tenure as director of sports for CBS Radio, and his second acts as an Episcopal lay reader, sportswriter, and weekly guest with Bob Edwards on NPR’s Morning Edition. This talented public figure was also a private man committed to rigorous self-examination and willing to evolve and grow under the influence of changing times. When the Dodgers first signed Jackie Robinson and smashed the color barrier in Major League Baseball, Barber struggled to overcome the racism he had absorbed from his culture as a child. But after observing the vicious abuse Robinson endured from opposing fans, Barber became an ardent supporter of him and the many Black players who followed. Barber was also bothered deeply by the strains that his single-minded careerism imposed on his family. He was challenged to navigate longtime family tensions after his only child, Sarah, came out as a lesbian. And his primary role during the later years of his life was caretaking for his wife, Lylah, during her decline from Alzheimer’s disease, at a time when the ailment was something many families concealed.

Ultimately Red Barber traces the career of a true radio and television pioneer who was committed to the civic responsibility of mass media. Barber firmly believed the most important role of a broadcaster was telling the truth and promoting public well-being.
Judith R. Hiltner is professor emeritus of literature and languages at Saint Xavier University and the author of books and articles on American literature and culture, including critical and biographical studies of Herman Melville, Philip Freneau, and Deborah Sampson. James R. Walker is professor emeritus of communication at Saint Xavier University and a past executive director of the International Association of Communication and Sport. He is the author of several books, including Crack of the Bat: A History of Baseball on the Radio (Nebraska, 2015), and is the coauthor of Center Field Shot: A History of Baseball on Television (Nebraska, 2008).
"The 'Old Red Head' made his fame . . . with the Dodgers at Ebbets Field, where he spiced his calls with folksy Barberisms like 'rhubarb' for arguments and fights on the field, 'the catbird seat' for dominance, and 'the bases are F.O.B.'—'full of Brooklyns.' Now his story is enshrined. . . . It's quite a tale. . . . Red Barber was that voice—with, as the authors write, ‘the unique perspective and gifts of the storyteller’—that burnished baseball in one of its golden ages."—Wall Street Journal

"Red Barber is a first-rate biography of an extremely important figure in baseball history."—Spitball Magazine

"A compelling portrait of a sportscaster endowed with a rare breadth of social and psychological understanding."—Booklist, starred review

"Anyone who wants to know what broadcasting was like before the advent of spin rates and exit velocity, reading Red Barber would be a good place to start."—Chip Ainsworth, Daily Hampshire Gazette

“Red Barber is one of the greatest and most influential baseball broadcasters ever to occupy the ‘catbird seat,’ as the ‘Ol’ Redhead’ called it. From Jackie Robinson’s debut to Bobby Thomson’s Shot Heard ’Round the World. From Brooklyn’s beloved ‘Bums’ to the Mantle/Maris Yankees, to mentoring a young Vin Scully, Barber’s life and career are an important part of baseball history and the history of the craft he mastered. This complete and carefully researched biography is both merited and most welcome.”—Bob Costas, twenty-nine-time Emmy Award–winning broadcaster and 2018 Ford C. Frick Award honoree

“Red Barber was the lilting voice of the Reds, the Dodgers, the Yankees, and National Public Radio. But more than that, he was the conscience of baseball, a man who believed in the power of broadcast for the good of the game and its listeners. Red was perched in the catbird seat while big-league baseball grew in ways he could barely have imagined; he grew with it, as an announcer and as an American. With Red Barber: The Life and Legacy of a Broadcasting Legend, the authors have given this complicated, important figure the biography he deserves.”—John Thorn, official historian, Major League Baseball

“At last a full biography of a legendary sports broadcasting pioneer. Red Barber balanced responsible reporting with charming entertainment. Judith Hiltner and James Walker explain how the Old Redhead retained his personal integrity in a field where baseball, broadcasting, and sponsors want total control.”—Bob Edwards, author of Fridays with Red: A Radio Friendship

“Red Barber’s voice was my lullaby. He sang me to sleep from the catbird seat, his honeyed literacy suffusing my dreams and forming the bedrock of my writing life in baseball. When I stupidly sent him my raunchy, fictional love letter to the game, hoping he would embrace it, it showed just how little I knew about this complex and courtly gentleman, the seminal voice of baseball broadcasting. Now, thanks to Judith Hiltner and James Walker, Walter Lanier ‘Red’ Barber has belatedly received the serious and definitive biography he deserves.”—Jane Leavy author of The Big Fella: Babe Ruth and the World He Created

"For a history lesson on American broadcasting, and one of the industry's earliest pioneers, Red Barber: The Life and Legacy of a Broadcasting Legend should be required reading for all sports fans."—Don Laible, Bradenton Times