Aquaman and the War against Oceans: Comics Activism and Allegory in the Anthropocene (Encapsulations: Critical Comics Studies) (Paperback) 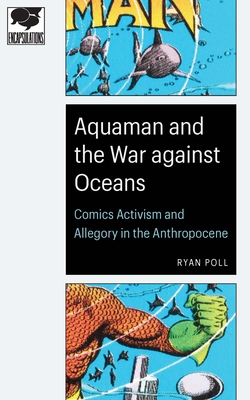 Aquaman and the War against Oceans: Comics Activism and Allegory in the Anthropocene (Encapsulations: Critical Comics Studies) (Paperback)


Not On Our Shelves—Ships in 1-5 Days
The reimagining of Aquaman in The New 52 transformed the character from a joke to an important figure of ecological justice. In Aquaman and the War against Oceans, Ryan Poll argues that in this twenty-first-century iteration, Aquaman becomes an accessible figure for charting environmental violences endemic to global capitalism and for developing a progressive and popular ecological imagination.

Poll contends that The New 52 Aquaman should be read as an allegory that responds to the crises of the Anthropocene, in which the oceans have become sites of warfare and mass death. The Aquaman series, which works to bridge the terrestrial and watery worlds, can be understood as a form of comics activism by its visualizing and verbalizing how the oceans are beyond the projects of the “human” and “humanism” and, simultaneously, are all-too-human geographies that are inextricable from the violent structures of capitalism, white supremacy, and patriarchy. The New 52 Aquaman, Poll demonstrates, proves an important form of ocean literacy in particular and ecological literacy more generally.
Ryan Poll is an associate professor of English at Northeastern Illinois University. He is the author of Main Street and Empire: The Fictional Small Town in the Age of Globalization.
“Aquaman and the War against Oceans couldn’t be more important to read. It is the book for our times. Ryan Poll has written a page-turner, and not many academic texts can be called that. It is probably the smoothest integration of scholarly and journalistic sources I have yet encountered, written in a style that could be enjoyed by superhero fandom, undergraduates in an environmental humanities course, and scholars doing research on ecocriticism and superhero politics.”—Marc DiPaolo, author of Fire and Snow: Climate Fiction from the Inklings to “Game of Thrones”