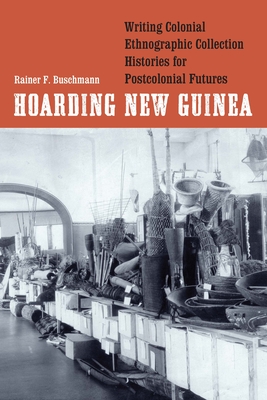 
Coming Soon—Pre-Order Now
Hoarding New Guinea provides a new cultural history of colonialism that pays close attention to the millions of Indigenous artifacts that serve as witnesses to Europe’s colonial past in ethnographic museums. Rainer F. Buschmann investigates the roughly two hundred thousand artifacts extracted from the colony of German New Guinea from 1870 to 1920. Reversing the typical trajectories that place ethnographic museums at the center of the analysis, he concludes that museum interests in material culture alone cannot account for the large quantities of extracted artifacts.

Buschmann moves beyond the easy definition of artifacts as trophies of colonial defeat or religious conversion, instead employing the term hoarding to describe the irrational amassing of Indigenous artifacts by European colonial residents. Buschmann also highlights Indigenous material culture as a bargaining chip for its producers to engage with the imposed colonial regime. In addition, by centering an area of collection rather than an institution, he opens new areas of investigation that include non-professional ethnographic collectors and a sustained rather than superficial consideration of Indigenous peoples as producers behind the material culture. Hoarding New Guinea answers the call for a more significant historical focus on colonial ethnographic collections in European museums.
Rainer F. Buschmann is program chair and a professor of history at California State University, Channel Islands. He is the author of several books, including Iberian Visions of the Pacific Ocean, 1507–1899 and Anthropology’s Global Histories: The Ethnographic Frontier in German New Guinea, 1870–1935.
“Hoarding New Guinea manages to be both historically grounded and also attuned to contemporary recognitions of Indigenous agency. The book’s findings and conclusions are sobering, surprising, and illuminating in equal measure, and a refreshing corrective to much superficial postcolonial writing that simplifies and flattens the complexities of the colonial encounter.”—Conal McCarthy, author of Museums and Māori: Heritage Professionals, Indigenous Collections, Current Practice

“This book establishes its topical focus—the hoarding of New Guinea—in a sound analysis of colonial ethnographic collection histories, thus grounding the critique of the present and potential reimagination of the future in a nuanced understanding of the past. Such careful and detailed work is much needed, long overdue, and highly important. It will be of interest to museum scholars as well as professionals and students.”—Philipp Schorch, author of Refocusing Ethnographic Museums through Oceanic Lenses