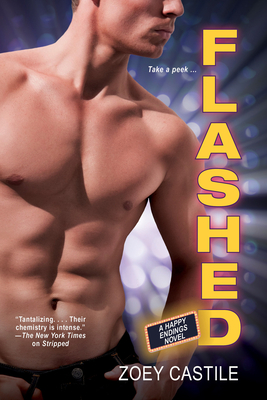 This is book number 3 in the Happy Endings series.

When a man makes his living by his looks, he can forget that love—and lust—are more than skin deep. But the right woman can remind him . . .

A former soccer player, stripper, and model, legendary party boy Patrick Halloran finally gets his big break starring in the summer blockbuster. But when an accident leaves him changed forever, he hides away in his secluded Montana ranch. Only his new housekeeper is allowed inside—with one rule: she’s not allowed to see him. But Pat sees her, and she’s the most stunning woman he’s ever laid eyes on. Even her voice is beautiful. Still, Pat can’t allow himself to get close to anyone. Not without a fight at least . . .

Magdalena “Lena” Martel is a long way from Queens, New York. After a rough patch, the aspiring artist is working her way through college—even if it means keeping house for a man whose gruff voice she can only hear through a closed door. Still, Lena senses Pat’s got a good heart, maybe even a lovable one. She’s intrigued—until his anger sends her running into the freezing woods. Now Pat will have to find her—and when he does he may have found the one woman who can thaw his heart—not to mention the rest of him. But can their new bond survive the paparazzi—and their personal
demons? . . .

“That smile you have on your face right now? It’ll be there the entire time you’re reading Stripped.” —Jasmine Guillory, Oprah Magazine
Zoey Castile was born in Ecuador and raised in Queens, New York. She started writing in her teens and pursued that love in her studies at Hunter College and the University of Montana. For nearly a decade, she worked as a bartender, hostess, and manager in New York City's nightlife. You can follow her on Twitter and Instagram @ZoeyCastile. You can also email her at ZoeyCastile@gmail.com.
“A sexy, modern fairy tale that caps off an entertaining series.”
—Kirkus Reviews

“Castile’s crafted another bright jewel of a book—sparkling with humor and shimmering with heat, Flashed slowly reveals poignant depths about redemption, loneliness, and the kind of love that transforms us into better, braver people.  Come for the sexy, brooding ex-dancer and stay for the gorgeous narrative of healing and trust (but also for the sexiness and brooding).  Five Montana recluse stars!”
—USA Today bestselling author Sierra Simone

“Patrick and Lena are incredibly likeable characters, and they defy the odds by sticking with one another. Great romances remind us that the heart wants what the heart wants, and it knows when it’s time to move forward.”
—​BookPage

“Readers will appreciate the Beauty and the Beast feel of this entry into Castile's sexy Happy Endings series.”
—Booklist STARRED REVIEW