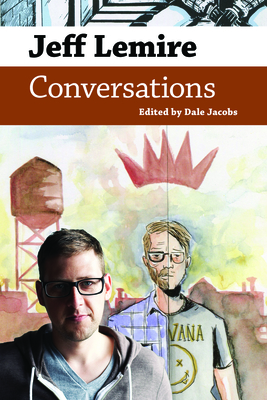 
Not On Our Shelves—Ships in 1-5 Days
In a 2019 interview with the webzine DC in the 80s, Jeff Lemire (b. 1976) discusses the comics he read as a child growing up in Essex County, Ontario--his early exposure to reprints of Silver Age DC material, how influential Crisis on Infinite Earths and DC's Who's Who were on him as a developing comics fan, his first reading of Watchmen and The Dark Knight Returns, and his transition to reading the first wave of Vertigo titles when he was sixteen. In other interviews, he describes discovering independent comics when he moved to Toronto, days of browsing comics at the Beguiling, and coming to understand what was possible in the medium of comics, lessons he would take to heart as he began to establish himself as a cartoonist. Many cartoonists deflect from questions about their history with comics and the influences of other artists, while others indulge the interviewer briefly before attempting to steer the questions in another direction. But Lemire, creator of Essex County Trilogy, Sweet Tooth, The Nobody, and Trillium, seems to bask in these discussions. Before he was ever a comics professional, he was a fan. What can be traced in these interviews is the story of the movement from comics fan to comics professional. In the twenty-nine interviews collected in Jeff Lemire: Conversations, readers see Lemire come to understand the process of collaboration, the balancing act involved in working for different kinds of comics publishers like DC and Marvel, the responsibilities involved in representing characters outside his own culture, and the possibilities that exist in the comics medium. We see him embrace a variety of genres, using each of them to explore the issues and themes most important to him. And we see a cartoonist and writer growing in confidence, a working professional coming into his own.
Dale Jacobs is professor of English at University of Windsor. He is author of Graphic Encounters: Comics and the Sponsorship of Multimodal Literacy and editor of The Myles Horton Reader: Education for Social Change. His essays on comics have appeared in Inks: The Journal of the Comics Studies Society, English Journal, College Composition and Communication, Journal of Comics and Culture, and Studies in Comics.