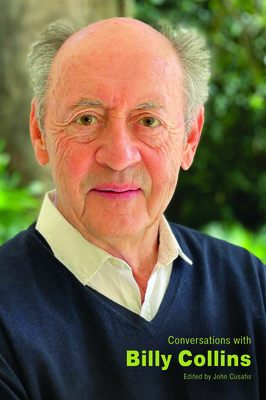 
In Stock—Click for Locations
Billy Collins "puts the 'fun' back in profundity," says poet Alice Fulton. Known for what he has called "hospitable" poems, which deftly blend wit and erudition, Collins (b. 1941) is a poet of nearly unprecedented popularity. His work is also critically esteemed and well represented in The Norton Anthology of American Literature. An English professor for five decades, Collins was fifty-seven when his poetry began gathering considerable international attention. Conversations with Billy Collins chronicles the poet's career beginning with his 1998 interview with Terry Gross on Fresh Air, which exponentially expanded his readership, three years prior to his being named United States Poet Laureate. Other interviewers range from George Plimpton, founder of the Paris Review, to Pulitzer Prize-winning poet Henry Taylor to a Presbyterian pastor, a physics professor, and a class of AP English Literature students. Over the course of the twenty-one interviews included in the volume, Collins discusses such topics as discovering his persona, that consistently affable voice that narrates his often wildly imaginative poems; why poetry is so loved by children but often met with anxiety by high school students; and his experience composing a poem to be recited during a joint session of Congress on the first anniversary of 9/11, a tragedy that occurred during his tenure as poet laureate. He also explores his love of jazz, his distaste for gratuitously difficult poetry and autobiographical poems, and his beguiling invention of a mock poetic form: the paradelle. Irreverent, incisive, and deeply life-affirming--like his twelve volumes of poetry--these interviews, gathered for the first time in one volume, will edify and entertain readers in the way his sold-out readings have done for the past quarter century.
John Cusatis teaches at the Charleston School of the Arts. He is author of Understanding Colum McCann, the first critical study of the Irish-born National Book Award winner; editor of Postwar Literature, 1945-1970 and three volumes of the Dictionary of Literary Biography; and coeditor of Conversations with John Banville, published by University Press of Mississippi.