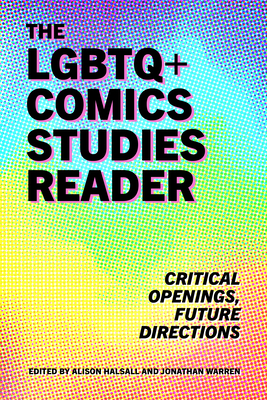 The LGBTQ+ Comics Studies Reader explores the exemplary trove of LGBTQ+ comics that coalesced in the underground and alternative comix scenes of the mid-1960s and in the decades after. Through insightful essays and interviews with leading comics figures, volume contributors illuminate the critical opportunities, current interactions, and future directions of these comics. This heavily illustrated volume engages with the work of preeminent artists across the globe, such as Howard Cruse, Edie Fake, Justin Hall, Jennifer Camper, and Alison Bechdel, whose iconic artwork is reproduced within the volume. Further, it addresses and questions the possibilities of LGBTQ+ comics from various scholarly positions and multiple geographical vantages, covering a range of queer lived experience. Along the way, certain LGBTQ+ touchstones emerge organically and inevitably--pride, coming out, chosen families, sexual health, gender, risk, and liberation. Featuring comics figures across the gamut of the industry, from renowned scholars to emerging creators and webcomics artists, the reader explores a range of approaches to LGBTQ+ comics--queer history, gender and sexuality theory, memory studies, graphic medicine, genre studies, biography, and more--and speaks to the diversity of publishing forms and media that shape queer comics and their reading communities. Chapters trace the connections of LGBTQ+ comics from the panel, strip, comic book, graphic novel, anthology, and graphic memoir to their queer readership, the LGBTQ+ history they make visible, the often still quite fragile LGBTQ+ distribution networks, the coded queer intelligence they deploy, and the community-sustaining energy and optimism they conjure. Above all, The LGBTQ+ Comics Studies Reader highlights the efficacy of LGBTQ+ comics as a kind of common ground for creators and readers.
Alison Halsall is associate professor in the Department of Humanities at York University, Toronto, Canada. She is editor of White Rose and the Red, and her work has been published in such edited volumes and journals as Cultural and Creative Industries of Childhood and Youth; Graphic Perspectives on Health and Embodiment; and INKS: The Journal of the Comics Studies Society. She specializes in Victorian and modernist literatures, with a particular emphasis on visual cultures, which includes the study of paintings and illustrations, contemporary film, comics, and graphic narratives. Jonathan Warren is associate professor and former chair in the English Department at York University. He is editor of the Norton Critical Edition of Henry James's The Turn of the Screw, and his work has been published in such journals as the Henry James Review, Studies in Twentieth-Century Literature, and the American Century. A specialist in literary modernism and its precursors, including especially American literature of the nineteenth and twentieth centuries, he has taught York's massively popular undergraduate and graduate courses in comics since inventing them two decades ago.