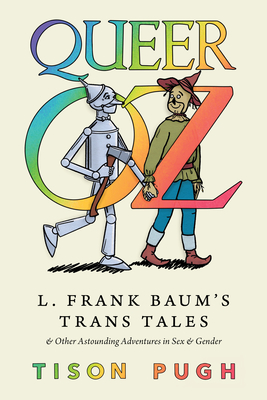 
Coming Soon—Pre-Order Now
Regardless of his own sexual orientation, L. Frank Baum's fictions revel in queer, trans, and other transgressive themes. Baum's life in the late 1800s and early 1900s coincided with the rise of sexology in the Western world, as a cascade of studies heightened awareness of the complexity of human sexuality. His years of productivity also coincided with the rise of children's literature as a unique field of artistic creation. Best known for his Oz series, Baum produced a staggering number of children's and juvenile book series under male and female pseudonyms, including the Boy Fortune Hunters series, the Aunt Jane's Nieces series, and the Mary Louise series, along with many miscellaneous tales for young readers. Baum envisioned his fantasy works as progressive fictions, aspiring to create in the Oz series "a modernized fairy tale, in which the wonderment and joy are retained and the heartaches and nightmares are left out." In line with these progressive aspirations, his works are often sexually progressive as well, with surprisingly queer and trans touches that reject the standard fairy-tale narrative path toward love and marriage. From Ozma of Oz's backstory as a boy named Tip to the genderless character Chick the Cherub, from the homosocial adventures of his Boy Fortune Hunters to the determined rejection of romance for Aunt Jane's Nieces, Queer Oz: L. Frank Baum's Trans Tales and Other Astounding Adventures in Sex and Gender shows how Baum exploited the freedoms of children's literature, in its carnivalesque celebration of a world turned upside-down, to reimagine the meanings of gender and sexuality in early twentieth-century America and to re-envision them for the future.
Tison Pugh is Pegasus Professor of English at the University of Central Florida. He is author or editor of over twenty books, including Harry Potter and Beyond: On J. K. Rowling's Fantasies and Other Fictions; The Queer Fantasies of the American Family Sitcom; and Innocence, Heterosexuality, and the Queerness of Children's Literature.