Seriously Good Chili Cookbook: 177 of the Best Recipes in the World (Hardcover) 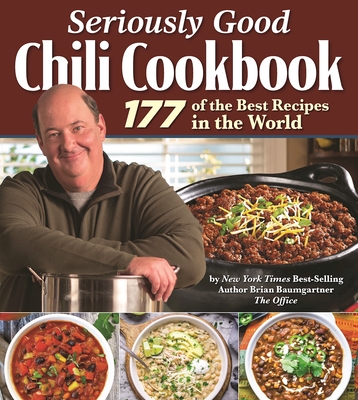 Seriously Good Chili Cookbook: 177 of the Best Recipes in the World (Hardcover)

No one takes chili more seriously than Brian Baumgartner, whose character as Kevin Malone became a household name in the Emmy-winning TV series, The Office. In real life, Brian is a true chili master and aficionado who is just as serious as his fictional counterpart about making the most perfect pot of chili. Featuring 177 chili recipes stamped with Brian's "seriously good" approval rating, Seriously Good Chili Cookbook contains new and inventive ways to spice up chili for all occasions, all year long. Written in the humorous and friendly tone Brian Baumgartner is known and loved for, this engaging cookbook opens with an introduction from Brian about how an infamous 60-second scene from the show transformed him into a chili icon, his passion for chili, and a fascinating account of the history of his all-time favorite comfort food. Each section that follows showcases specific styles of chili - from Texas chili and Cincinnati chili to turkey chili, chili verde, vegetarian, and other regional and international variations. Every mouth-watering recipe has been contributed by renowned chefs, world championship chili cook-off winners, restaurant owners, TV celebrities, social media influencers, Brian himself, and his dedicated fan base. Also included are 50 championship-winning recipes from the International Chili Society's World Champion Chili Cook-Off spanning from 1967 to present day, a foreword by fellow The Office co-star, Oscar Nunez, and a bonus recipe of the official "Kevin's Famous Chili" from The Office So strap on your apron, grab a spoon, and dig in with Brian Baumgartner as your ultimate chili guide