Game of Thrones and the Theories of International Relations (Politics) (Paperback) 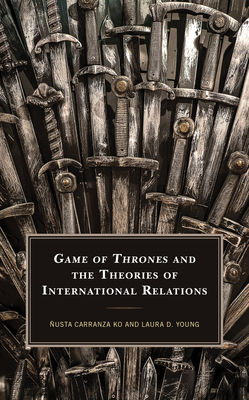 Game of Thrones and the Theories of International Relations (Politics) (Paperback)


Not On Our Shelves—Ships in 1-5 Days
For eight seasons the hit HBO series Game of Thrones painted a picture of a fantasy world filled with images such as white walkers (the undead), a three-eyed raven, and dragons. All these elements set the series visually apart, far distant from our realities. And yet, after each episode and season, viewers were left pondering about the wars, political games, diplomacy, and human rights violations that somehow resonated with the world today. Laura D. Young and usta Carranza Ko's groundbreaking book provides the answers to these questions that international relations scholars, historians, and fans have been wanting to know. How does Game of Thrones mirror international politics and how may the series provide a useful tool for better understanding the theories, concepts, and thematic issues in international relations? Game of Thrones and the Theories of International Relations connects the prominent international relations theories-realism, liberalism, constructivism, and critical identity theories-to the series, providing examples from various characters whose actions reflect applied scenarios of decision-making and strategizing.