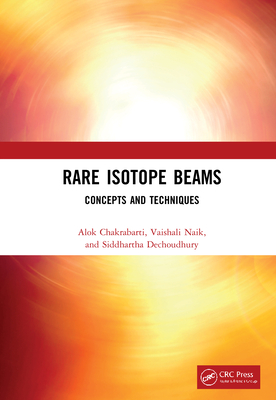 Rare Isotope Beams (RIBs) are ion beams of exotic radioactive nuclei. The study of these nuclei is key to understanding the limits of nuclear existence, nucleo-synthesis in such violent stellar sites as supernovae and merging neutron stars, and the fundamental symmetries of nature. These nuclei also provide a unique probe to study condensed matter and many of them are potentially new radioisotopes for more effective medical diagnostics and therapy.

Rare Isotope Beams: Concepts and Techniques gives an up-to-date overview of all these aspects of RIB science in a single volume containing the scientific motivation, production techniques, experimental techniques for studying exotic nuclei, methods used in condensed matter research, and medical applications. The emphasis throughout is on concepts to facilitate understanding of the essence of each topic in this diverse and cross-disciplinary field involving nuclear physics, astrophysics, and particle accelerators. A brief description of major RIB facilities is also presented.

Exotic nuclei are difficult to produce in enough numbers and their production involves different nuclear reaction routes and a wide range of advanced technologies, which are presented in a comprehensive manner. Experimental techniques used to study exotic nuclei are provided with examples highlighting the intricate nature of such experiments. Another unique feature is the open-ended nature of the discussions, bringing out the future challenges and possibilities in this evolving field.

The book offers an excellent overview of concepts and techniques involved in RIB science for new researchers entering the field as well as professionals.

Alok Chakrabarti, former Director at the Variable Energy Cyclotron Center (VECC), Kolkata, India, and former Raja Ramanna Fellow at VECC, is an accomplished Physicistand a leader who has pioneered the fields of Exotic Nuclei and Rare Isotope Beams (RIB)in India.Dr. Chakrabarti began his career in 1979 at the Bhabha Atomic Research Center (BARC), Mumbai, India, and earned his Ph.D. from the University of Calcutta, Kolkata, India. Arecipient of the Indian Physical Society's Young Physicist award, DAE's Homi BhabhaScience and Technology Award and "Brojendranath Seal Smarak Samman," he has publishedmore than 100 papers in reputed peer-reviewed journals. Dr. Chakrabarti is regularlyinvited to deliver lectures at institutes of world repute and prestigious conferences.For his research, Dr. Chakrabarti built India's first on-line isotope separator at VECC anddeveloped many key techniques for experimental study of short-lived nuclei. His majorcontributions include the discovery of a new isomer, a new technique for beta-delayedproton spectroscopy and an innovative experimental study which proves that asymmetricsplitting survives in fission, rather surprisingly, up to quite high excitations and that thereis a signature of bi-modal fission.As a Project Director, Dr. Chakrabarti initiated and led the RIB project at VECC forwhich he successfully developed a number of advanced particle accelerators. Thisincludes India's first heavy ion Radio Frequency Quadrupole (RFQ) linac, a state-of-the-artmachine that efficiently accelerates low-energy ion beams. Dr. Chakrabarti, along with Dr.Dechoudhury, suggested a novel concept on "Alternate Phase focusing in independentlyphased superconducting resonators," which makes acceleration of particles much moreefficient and allows acceleration of ions having different charge states.Dr. Chakrabarti has supervised more than a dozen Ph.D. students. He also serves asReferee for journals such as European Physics Journal A, Review of Scientific Instruments, Pramana, Nuclear Instruments and Methods and Ceramics International and serves on theScientific Committees of major international conferences in the field of particle accelerators.Vaishali Naik is presently serving as Head of the RIB Facilities Group at VECC, Kolkata, India. A post-graduate in the Department of Physics, University of Pune, India, Dr. Naikgraduated from the 33rd batch of training school at BARC, Mumbai, India. She joinedVECC in 1991 and began her career as an experimental nuclear physicist. She later startedworking on particle accelerator development for the RIB program, where she played aleading role in the design and development of ECR ion sources and RFQ linacs and developeda gas-jet ECR technique that led to the first successful production of RIBs using thefacility at VECC. A recipient of the DAE Scientific and Technical Excellence Award andGroup Achievement Awards, Dr. Naik has published more than 30 papers in reputed peerreviewedjournals. She is presently supervising several Ph.D. students as a Professor at theHomi Bhabha National Institute (HBNI) and is also the Project Leader for the superconductingelectron linac at VECC that is being built in collaboration with TRIUMF, Canada.Siddhartha Dechoudhury joined the RIB Facilities Group at VECC, Kolkata, India, in 2001as a Scientific Officer after completing his M.Sc. in Physics, followed by a one-year orientationcourse in the 44th batch of the Training School at BARC, Mumbai, India. Since then, he has been actively involved in the design and development of particle accelerators forthe RIB project at VECC. His doctoral thesis, under supervision of Dr. Alok Chakrabarti, was on the development of a heavy ion rod type RFQ, which is the first of its kind inIndia. Presently he is involved in the development of a superconducting electron linacphoto-fission driver, which is a joint collaboration between VECC and TRIUMF, Canada.Dr. Dechoudhury was conferred with a DAE Young Scientist Award in 2007 and a DAEScience and Technology Award in 2010. He has contributed to 30 publications in reputedpeer-reviewed journals and about 40 papers in national and international particle acceleratorconferences.