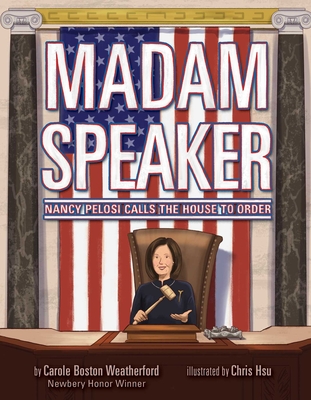 
In Stock—Click for Locations
"The text is accessible and clever. . . . It's possible that even children of Republicans will be inspired by the ending." -Kirkus Reviews

"This book will inspire young readers through its positive portrayal of American politics and of Pelosi as a strong woman leader." -Booklist

"An engaging introduction to the most powerful woman in current American politics." -School Library Journal

This empowering picture book tells the story of Nancy Pelosi, the first female Speaker of the House and one of the most powerful women in US politics!

Nancy Pelosi is a beacon of patriotism and integrity, demonstrating strength and leadership in her over 30 years in public office. A politician, mother of five, and tireless advocate for the underprivileged, she has dedicated her life to correcting injustice and inequality, and she serves her country with confidence and compassion. Rising from the California Democratic Party Chair to House Minority Leader to become the first woman Speaker of the House, Nancy Pelosi is a gifted leader and an inspiration to young women everywhere.

This picture book chronicles the life of one of the United States's most influential women, telling a story that is equal parts moving and empowering.
Carole Boston Weatherford has written many award-winning books for children, including Coretta Scott King winner RESPECT: Aretha Franklin, the Queen of Soul; Newbery Honor winner BOX: Henry Box Brown Mails Himself to Freedom; Caldecott Honor winners Freedom in Congo Square; Voice of Freedom: Fannie Lou Hamer; and Moses: When Harriet Tubman Led Her People to Freedom, as well as Golden Kite Award winners Dear Mr. Rosenwald; Schomburg: The Man Who Built a Library; and The Roots of Rap. She is currently a professor of English at Fayetteville State University in North Carolina where she created a hip-hop course. Find out more about her at cbweatherford.com.

Chris Hsu is a traditionally trained artist and animation background painter whose credits include the animated spy comedy Archer and an upcoming Marvel animated project. His picture book work, which includes the award-winning The Boo- Boos That Changed the World and I Am Someone Else: Poems About Pretending, is heavily influenced by art history and music. Born in Taipei, Taiwan, and raised in Florida, he's currently based in the Southeast with his wife and two funny and lovely daughters.
A short, admiring biography, punctuated with quotations from Pelosi and accompanied by simple, stylized art.
The initial double-page spread shows little Nancy D'Alesandro stuffing envelopes for one of her father's political campaigns. (He served both in Congress and as Baltimore's mayor.) A framed family portrait-including Nancy's five older brothers-sits beneath a quotation in which she lists her family's allegiances to Catholicism, patriotism, Italian American pride, and the Democratic Party. The text is accessible and clever, as in its assertion that Nancy and her brothers "looked up" to portraits of past presidents and also "never looked down on those who needed a hand up." As the text reveals her passage from youth into adulthood, it suggests that Pelosi learned about leadership from her father and from nuns at her college prep school. Pelosi's own words add motherhood to her leadership training. This and other well-chosen quotations show her cleareyed understanding from an early age of gender-based power dynamics. The text follows her further education; her marriage and swift plunge into raising five children; her congressional work in support of LGBTQ+ rights and the Affordable Care Act; her record-breaking eight hours of speech to protect DACA recipients. The art includes mostly benevolent-looking people of varied racial presentations; the text barely suggests political discord but unabashedly highlights Pelosi's Democratic victories. It's possible that even children of Republicans will be inspired by the ending.
Overall, a solid choice for first-time biography readers.
— Kirkus Reviews

Given the sharp partisan divide in this country, not everyone will welcome this glowing biography of House Speaker Nancy Pelosi. Those who are open to it, though, will be rewarded by a text that emphasizes empowerment and American values. The book discusses Pelosi's political family background, her Italian American and Catholic heritage, and her groundbreaking achievements as a political leader in the U.S. House of Representatives. The text does not shy away from specific issues but treats them gently. For example, Weatherford notes Pelosi's involvement with the AIDS Quilt, praises her work with President Obama to "extend . . . medical care to millions more Americans," and shows her passion for combating childhood poverty. Brief quotations from Pelosi bring the speaker to life. Hsu's illustrations capture both Pelosi's history and her signature looks with an appealing blend of realism and imagination. A final time line allows readers to briefly review Pelosi's life and career. This book will inspire young readers through its positive portrayal of American politics and of Pelosi as a strong woman leader.
— Booklist

Weatherford's picture book biography of groundbreaking stateswoman Nancy Pelosi recounts how her upbringing and family life informed her career priorities. The succinct narrative highlights Pelosi's childhood in a religious and political Italian American family (her mother wanted her to become a nun, "but I thought I might want to be a priest") and her rise from California Democratic Party chair to Speaker of the U.S. House, becoming "the first woman to be second in line to the presidency." Boxed quotations from Pelosi offer insight into her influences and motivations; one reveals how the busy mother of five "saw politics as an expansion of my role as a mom." Hsu's cartoon-style digital illustrations offer varying perspectives, depicting scenes ranging from a Catholic school classroom to the signing of the Affordable Care Act as seen from Pelosi's vantage. A bibliography and timeline conclude this favorable portrait of a glass-ceiling breaker.
— Publishers Weekly

As a child, Nancy Pelosi stuffed envelopes, handed out leaflets, and held the Bible as her father, Mayor Thomas D'Alesandro of Baltimore, was sworn into office. Additional childhood details are offered, including Pelosi's Catholic upbringing and education, as well as her political work while raising a family, her election to Congress, and 20 years later, her rise to become the first female Speaker of the House. Pelosi's advocacy and fight on behalf of children in poverty, gay rights, women, and the children of undocumented immigrants are all mentioned, as well as her work on the Affordable Care Act. Her determination and tenacity as a woman devoted to public service shine through, supported by abundant, relevant pull-quotes-one on nearly every spread. The book ends in 2018 with Pelosi taking the oath of Speaker of the House for the second time, and, surrounded by children, calling Congress to order. Hsu's stylized figures and use of color and detail add energy and a bit of humor (e.g., Pelosi dancing to rock 'n' roll as a teen). This work complements Elisa Boxer's A Seat at the Table, a biography that emphasizes Pelosi's struggle as a woman in politics, with fewer specifics on the causes Pelosi has championed. There is nary a mention of her ­equally powerful political detractors holding seats in Washington. VERDICT An engaging introduction to the most powerful woman in current American politics.
— School Library Journal