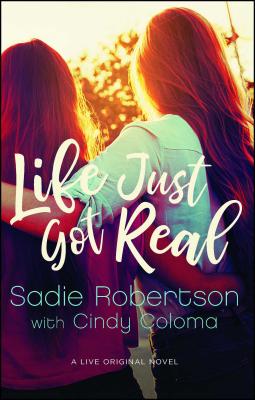 By Sadie Robertson, Cindy Coloma (With)


Not On Our Shelves—Ships in 1-5 Days
From Dancing with the Stars runner-up and Duck Dynasty star Sadie Robertson comes a fun novel about two teenage girls from different backgrounds and opposite lifestyles who discover there is more to friendship than meets the eye.

Sixteen-year-old A.J. Smith grew up in backwoods Louisiana, repairing cars with her dad and hunting with her brothers. But when her dad dies, her mom drags the whole family to Nashville where everything is different—except A.J. And A.J. knows it will take everything she has to live original.

Kate Kelly grew up in Nashville’s best schools, jetting around the world with glamorous people and wearing clothes from her mom’s trendy boutique. But when A.J. Smith―a new girl from the sticks—shows up, suddenly she’s all the rage: her unusual sense of style, her accent, and especially her dumb converse high tops. Even Kate’s brother, Kaden, seems to be under the new girl’s spell. But Kate has bigger things to think about, including the reality show Real Life. Everyone says the show is her chance to make it big. But then the producers decide to bring A.J. into the show.

Because these girls are so different, the producers of Real Life know that their conflict will be television gold. So the cameras start to roll. Then Kaden asks A.J. to prom, Kate flips out, and things with Kate’s (almost) boyfriend Alex start unraveling fast—all on camera. As the producers try to stir up the drama, Kate’s idea of the perfect prom spins out of control. When Kate’s life goes disastrously wrong, it is A.J. who steps up to help—no questions asked. A friendship between the two girls just might grow—but only if they both live original and stay true to who God made them to be.
Sadie Robertson catapulted into stardom as a young teenager, starring in the hit reality series A&E’s Duck Dynasty, as well as landing first runner up on ABC’s Dancing With The Stars Season 19 at just 17 years of age. The now 20-year-old has expanded her platform as a motivational speaker and advocate for her generation. On a mission to empower her peers in the name of positivity, self-confidence, and a call to “live original,” Sadie designed and launched a 16-city motivational tour called the Live Original Tour in 2016. She recently announced her plans for Live Original Tour 2017 set for this fall. Sadie has also ventured into acting, appearing in God’s Not Dead 2, the 2016 film about Columbine shooting victim Rachel Joy Scott I’m Not Ashamed, as well as taking on a starring role in the Hallmark movie, Sun, Sand, & Romance.

Sadie embodies the creative and entrepreneurial spirit of the Robertson family and has carried her philosophy into multiple business ventures including her own phone app, SADIE, a prom dress line with Sherri Hill, school supplies for DaySpring, jewelry and home goods with Glory Haus, and a fashion line with Wild Blue Denim. She has also partnered with Roma Boots and worked alongside them in their mission to “give poverty the boot” and spends time every year traveling the world serving those in need with One Squad, a group of young people that Sadie created with Help One Now, that seeks to engage her generation in social justice by caring for children and orphans around the world.

A bestselling author, Sadie is currently working on the follow up to her New York Times bestselling book, Live Original: How the Duck Commander Teen Keeps It Real and Stays True to Her Values, which, along with her newest books, Life Just Got Real and Live Original Devotional are available at retailers nationwide. For more information, please visit LiveOriginal.com.