The Tomorrow Game: Rival Teenagers, Their Race for a Gun, and a Community United to Save Them (Hardcover) 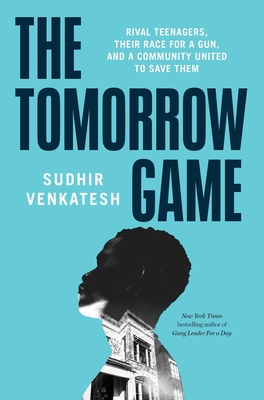 The Tomorrow Game: Rival Teenagers, Their Race for a Gun, and a Community United to Save Them (Hardcover)


On Our Shelves Now at:
A New York Times bestselling author’s gripping account of a Chicago community coming together to save a group of teenagers from gun violence.

In the tradition of works like Random Family and Behind the Beautiful Forevers, Sudhir Venkatesh’s The Tomorrow Game is a deeply reported chronicle of families surviving in a Southside Chicago community.

At the heart of the story are two teenagers: Marshall Mariot, an introverted video gamer and bike rider, and Frankie Paul, who leaves foster care to direct his cousin’s drug business while he’s in prison. Frankie devises a plan to attack Marshall and his friends—it is his best chance to showcase his toughness and win respect for his crew. Catching wind of the plan, Marshall and his friends decide they must preemptively go after Frankie’s crew to defend their honor. The pressure mounts as both groups of teens race to find a gun and strike first. All the while, the community at large—a cast that includes the teens’ families, black market gun dealers, local pastors, a bodega owner and a veteran beat cop—try their best to defuse the conflict and keep the kids alive.

Based on Venkatesh’s three decades of immersion in Chicago’s Southside, and as propulsive as a novel, The Tomorrow Game is a nuanced, timely look at the toll that poverty and gun violence take on families and their communities.
Sudhir Venkatesh is the author of Floating City and Gang Leader for a Day, a New York Times bestseller that received a best book of the year award from The Economist. He has been a Columbia University Professor, a Director of Safety teams at Facebook and Twitter, and a Senior Advisor to the Department of Justice. Venkatesh’s writings have appeared in the New York Times, the Chicago Tribune, and The Washington Post. He lives in New York City.
“A street-smart sociologist looks at gang warfare in Chicago as a machine that, once set in motion by various forces, is hard to stop…A good choice for anyone interested in how troubled neighborhoods are policed and conflicts mediated.”—Kirkus Reviews

“Sudhir Venkatesh's new work is powerful and indispensable. It's nearly impossible to tell true stories about people who live underground and face mortal dangers if exposed, but by letting his subjects speak in their own voices and giving their stories a novelistic treatment, Venkatesh has achieved a breakthrough. The Tomorrow Game is disciplined, complex and confounding, and an effortless read. It poses more questions than answers—its great virtue. Venkatesh is rare in that his writing gains simplicity as his knowledge grows. His curiosity is a gift to the rest of us.” —Jill Leovy, author of the New York Times bestseller Ghettoside: A True Story of Murder in America

"What a story! Small but in no way insignificant, and told with some just remarkable reporting that etches out a cast of characters with such nuance and drama that you imagine you know them, and their worries, as they walk by you and into a corner store for a Mountain Dew."—Sam Quinones, journalist and author of The Least of Us: True Tales of America and Hope in the Time of Fentanyl and Meth

“In this close-up and often moving portrait of the human realities beneath the troubling statistics on youth violence, Sudhir Venkatesh compellingly shows how generations of neglect and insecurity have made danger a part of the natural landscape of our most abandoned communities. But at the same time, he reminds us of the remarkable capacity of those communities to come together to protect their children, against all odds.”—Elliott Currie, author of A Peculiar Indifference and the Pulitzer Prize-finalist Crime and Punishment in America and Professor at the University of California, Irvine

“A moment of gunfire ignites a kaleidoscopic story of before-and-afters, inviting us intimately into both a single community and a massive national crisis. Venkatesh uses his extraordinary access not just to welcome us into these young lives, but to imagine how these lives, and many others, would be in lived a society without guns. Meticulously observed, compulsively readable. “ —Lauren Sandler, author of This Is All I Got: A New Mother’s Search for Home