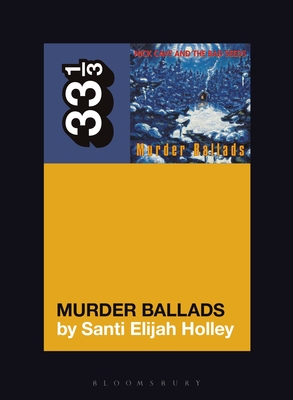 In a bar called The Bucket of Blood, a man shoots the bartender four times in the head. In the small town of Millhaven, a teenage girl secretly and gleefully murders her neighbors. A serial killer travels from home to home, quoting John Milton in his victims' blood.

Murder Ballads, the ninth studio album from Nick Cave and the Bad Seeds, is a gruesome, blood-splattered reimagining of English ballads, American folk and blues music, and classic literature. Most of the stories told on Murder Ballads have been interpreted many times, but never before had they been so graphic or profane. Though earning the band their first Parental Advisory warning label, Murder Ballads, released in 1996, brought Nick Cave and the Bad Seeds their biggest critical and commercial success, thanks in part to the award-winning single, "Where the Wild Roses Grow," an unlikely duet with Australian pop singer, Kylie Minogue. Closely examining each of the ten songs on the album, Santi Elijah Holley investigates the stories behind the songs, and the numerous ways these ballads have been interpreted through the years. Murder Ballads is a tour through the evolution of folk music, and a journey into the dark secrets of American history.
Santi Elijah Holley is a journalist and essayist in Portland, Oregon, covering music, books, culture, and religion. His work has appeared in The Atlantic, The Guardian, VICE, Tin House, and elsewhere