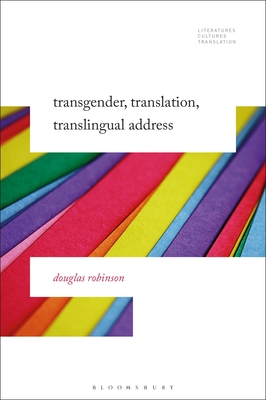 The emergence of transgender communities into the public eye over the past few decades has brought some new understanding, but also renewed outbreaks of violent backlash. In Transgender, Translation, Translingual Address Douglas Robinson seeks to understand the "translational" or "translingual" dialogues between cisgendered and transgendered people.

Drawing on a wide range of LGBT scholars, philosophers, sociologists, sexologists, and literary voices, Robinson sets up cis-trans dialogues on such issues as "being born in the wrong body," binary vs. anti-binary sex/gender identities, and the nature of transition and transformation. Prominent voices in the book include Kate Bornstein, C. Jacob Hale, and Sassafras Lowrey. The theory of translation mobilized in the book is not the traditional equivalence-based one, but Callon and Latour's sociology of translation as "speaking for someone else," which grounds the study of translation in social pressures to conform to group norms. In addition, however, Robinson translates a series of passages from Finnish trans novels into English, and explores the "translingual address" that emerges when those English translations are put into dialogue with cis and trans scholars.
Douglas Robinson is one of the world's leading translation scholars, and cis-gendered in a male body. Author or editor of two dozen books and five dozen articles on translation, literature, linguistics, rhetoric, writing, and gender, he is Chair Professor of English at Hong Kong Baptist University, Hong Kong.