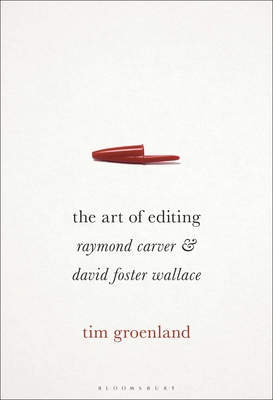 The place of the editor in literary production is an ambiguous and often invisible one, requiring close attention to publishing history and (often inaccessible) archival resources to bring it into focus. In The Art of Editing, Tim Groenland shows that the critical tendency to overlook the activities of editors and to focus on the solitary author figure neglects important elements of how literary works are acquired, developed and disseminated.

Focusing on selected works of fiction by Raymond Carver and David Foster Wallace, authors who represent stylistic touchstones for US fiction of recent decades, Groenland presents two case studies of editorial collaboration. Carver's early stories were integral to the emergence of the Minimalist movement in the 1980s, while Wallace's novels marked a generational shift towards a more expansive, maximal mode of narrative. The role of their respective editors, however, is often overlooked. Gordon Lish's part in shaping the form of Carver's early stories remains under-explored; analyses of Wallace's fiction, meanwhile, tend to minimise Michael Pietsch's role from the creation of Infinite Jest during the mid-1990s until the present day. Drawing on extensive archival research as well as interviews with editors and collaborators, Groenland illuminates the complex and often conflicting forms of agency involved in the genesis of these influential works. The energies and tensions of the editing process emerge as essential factors in the creation of fictions more commonly understood within the paradigm of solitary authorship. The mediating role of the editor is, Groenland argues, inseparable from the development, form, and reception of these works.
Tim Groenland is Lecturer/Assistant Professor in American Literature at the School of English, Drama, and Film, University College Dublin, Ireland.