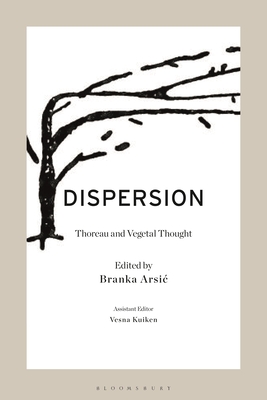 
Not On Our Shelves—Ships in 1-5 Days
Plants are silent, still, or move slowly; we do not have the sense that they accompany us, or even perceive us. But is there something that plants are telling us? Is there something about how they live and connect, how they relate to the world and other plants that can teach us about ecological thinking, about ethics and politics?

Grounded in Thoreau's ecology and in contemporary plant studies, Dispersion: Thoreau and Vegetal Thought offers answers to those questions by pondering such concepts as co-dependence, the continuity of life forms, relationality, cohabitation, porousness, fragility, the openness of beings to incessant modification by other beings and phenomena, patience, waiting, slowness and receptivity.
Branka Arsic is Charles and Lynn Zhang Professor of American Literature in the Department of English and Comparative Literature at Columbia University, USA. She is the author, most recently, of Bird Relics: Grief and Vitalism in Thoreau (2016), which was awarded the MLA James Russell Lowell prize for the outstanding book of 2016. She has also written On Leaving: A Reading in Emerson (2010), and a book on Melville entitled Passive Constitutions or 71/2 Times Bartleby (2007). She co-edited (with Kim Evans) a collection of essays on Melville, entitled Melville's Philosophies (Bloomsbury, 2017) and (with Cary Wolfe) a collection of essays on Emerson, entitled The Other Emerson: New Approaches, Divergent Paths (2010).