Podcast or Perish: Peer Review and Knowledge Creation in the 21st Century (Paperback) 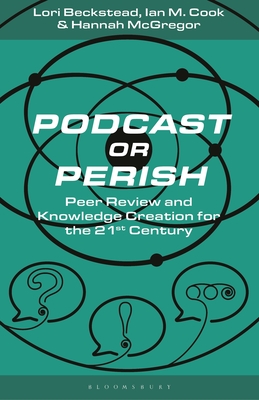 Podcast or Perish: Peer Review and Knowledge Creation in the 21st Century (Paperback)

Podcasting scholarship is still in its nascent stages. The use of podcasting as a tool for scholarly and intellectual inquiry is a relatively new idea, to think about the medium as an alternative outlet for research output. Podcast or Perish maps out not simply a rationale for the deployment of podcasting as an outlet for open peer review, but also explores some real-world workflows for such a practice.

At the forefront of merging these exciting fields, Lori Beckstead, Ian M. Cook, and Hannah McGregor have taken a novel approach to expanding the boundaries of scholarly knowledge by considering podcasting as a focal point for intellectual discussion, engagement, and exploration. By investigating the historical development of the norms of scholarly communication, the unique affordances of sound-based scholarship, and the transformative potential of new modes of knowledge production, Podcast or Perish is the call to action academia needs, by asking how podcasting might change the very ways we think about scholarly work.
Hannah McGregor is an Assistant Professor of Publishing at Simon Fraser University, Canada, where her research focuses on the intersections between publishing, podcasting, and social change. She is the co-creator of Witch, Please, a feminist podcast about the Harry Potter world, the creator of the scholarly podcast Secret Feminist Agenda, and the co-director of the Amplify Podcast Network. Ian M. Cook is a Research Fellow at the Central European University, Hungary, and an anthropologist working primarily on cities, digital media, environmental justice and doing academia differently. He has published work on small cities, housing, vigilantism, land and podcasting. He co-created the podcasts Online Gods and Urban Arena and co-founded CEU's podcast library. Lori Beckstead is a podcaster and Associate Professor in the RTA School of Media at Ryerson University, Canada, where she teaches radio, podcasting, and sound media. Her current research investigates diversity in audio media and interrogates the foundational structures of podcasting as a medium. Her work is often disseminated via 'alternate' means such as purpose-built interactive machines, installations, and podcasts.