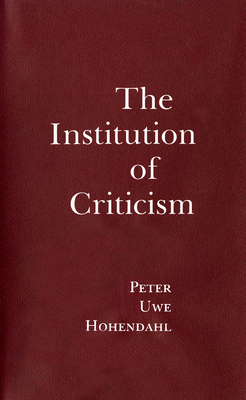 German radicals of the 1960s announced the death of literature. For them, literature both past and present, as well as conventional discussions of literary issues, had lost its meaning. In The Institution of Criticism, Peter Uwe Hohendahl explores the implications of this crisis from a Marxist perspective and attempts to define the tasks and responsibilities of criticism in advanced capitalist societies. Hohendahl takes a close look at the social history of literary criticism in Germany since the eighteenth century. Drawing on the tradition of the Frankfurt School and on J rgen Habermas's concept of the public sphere, Hohendahl sheds light on some of the important political and social forces that shape literature and culture. The Institution of Criticism is made up of seven essays originally published in German and a long theoretical introduction written by the author with English-language readers in mind. This book conveys the rich possibilities of the German perspective for those who employ American and French critical techniques and for students of contemporary critical theory.

Peter Uwe Hohendahl is Jacob Gould Schurman Professor Emeritus of German and Comparative Literature at Cornell University. He is an editor of the series Signale: Modern German Letters, Cultures, and Thought, which is copublished by Cornell University Press and the Cornell University Library. He is the author most recently of The Fleeting Promise of Art: Adorno's Aesthetic Theory Revisited, also from Cornell.