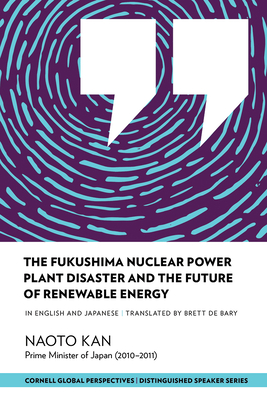 In a speech delivered in Japanese at Cornell University, Naoto Kan describes the harrowing days after a cataclysmic earthquake and tsunami led to the meltdown of three reactors at the Fukushima Daiichi Nuclear Power Plant. In vivid language, he tells how he struggled with the possibility that tens of millions of people would need to be evacuated.

Cornell Global Perspectives is an imprint of Cornell University's Mario Einaudi Center for International Studies. The works examine critical global challenges, often from an interdisciplinary perspective, and are intended for a non-specialist audience. The Distinguished Speaker series presents edited transcripts of talks delivered at Cornell, both in the original language and in translation.

Trained as a physicist, Naoto Kan became prime minister of Japan in June 2010 when the new Democratic Party of Japan swept the Liberal Democratic Party from power. As prime minister, he headed the government's response to the March 2011 Fukushima disaster. He resigned in September of that year. Since then, he has devoted himself to campaigning against the use of nuclear energy. He is the author of My Nuclear Nightmare: Leading Japan through the Fukushima Disaster to a Nuclear-Free Future.