Violence as Usual: Policing and the Colonial State in German Southwest Africa (Hardcover) 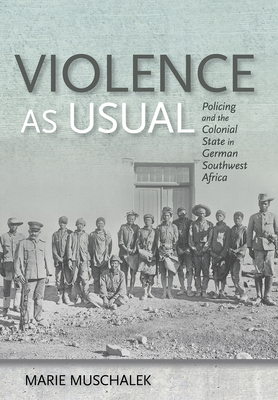 Violence as Usual: Policing and the Colonial State in German Southwest Africa (Hardcover)

Slaps in the face, kicks, beatings, and other forms of run-of-the-mill violence were a quotidian part of life in German Southwest Africa at the beginning of the twentieth century. Unearthing this culture of normalized violence in a settler colony, Violence as Usual uncovers the workings of a powerful state that was built in an improvised fashion by low-level state representatives.

Marie A. Muschalek's fascinating portrayal of the daily deeds of African and German men enrolled in the colonial police force called the Landespolizei is a historical anthropology of police practice and the normalization of imperial power. Replete with anecdotes of everyday experiences both of the policemen and of colonized people and settlers, Violence as Usual re-examines fundamental questions about the relationship between power and violence. Muschalek gives us a new perspective on violence beyond the solely destructive and the instrumental. She overcomes, too, the notion that modern states operate exclusively according to modes of rationalized functionality. Violence as Usual offers an unusual assessment of the history of rule in settler colonialism and an alternative to dominant narratives of an ostensibly weak colonial state.

Marie A. Muschalek is Lecturer and Researcher in History at the University of Freiburg. She is co-founder of a public history project on German's colonial past, which can be viewed online at kolonialismusimkasten.de.