Antifascism: The Course of a Crusade (Hardcover) 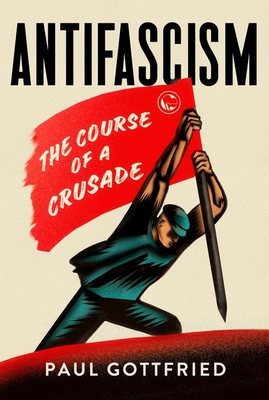 Antifascism: The Course of a Crusade (Hardcover)

A conservative take on the antifascist movement

Antifascism argues that current self-described antifascists are not struggling against a reappearance of interwar fascism, and that the Left that claims to be opposing fascism has little in common with any earlier Left, except for some overlap with critical theorists of the Frankfurt School. Paul Gottfried looks at antifascism from its roots in early twentieth-century Europe to its American manifestation in the present. The pivotal development for defining the present political spectrum, he suggests, has been the replacement of a recognizably Marxist Left by an intersectional one. Political and ideological struggles have been configured around this new Left, which has become a dominant force throughout the Western world.

Gottfried discusses the major changes undergone by antifascist ideology since the 1960s, fascist and antifascist models of the state and assumptions about human nature, nationalism versus globalism, the antifascism of the American conservative establishment, and Antifa in the United States. Also included is an excursus on the theory of knowledge presented by Thomas Hobbes in Leviathan.

In Antifascism Gottfried concludes that promoting a fear of fascism today serves the interests of the powerful--in particular, those in positions of political, journalistic, and educational power who want to bully and isolate political opponents. He points out the generous support given to the intersectional Left by multinational capitalists and examines the movement of the white working class in Europe--including former members of Communist parties--toward the populist Right, suggesting this shows a political dynamic that is different from the older dialectic between Marxists and anti-Marxists.

Paul Gottfried is Editor in Chief of Chronicles and former Horace Raffensperger Professor of Humanities at Elizabethtown College. He is the editor or author of fourteen books, including, The Vanishing Tradition and Fascism.