Counting Dreams: The Life and Writings of the Loyalist Nun Nomura Bōtō (Hardcover) 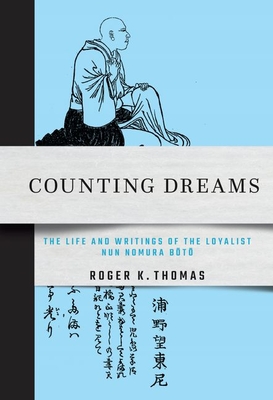 Counting Dreams: The Life and Writings of the Loyalist Nun Nomura Bōtō (Hardcover)

Counting Dreams tells the story of Nomura Bōtō, a Buddhist nun, writer, poet, and activist who joined the movement to oppose the Tokugawa Shogunate and restore imperial rule. Banished for her political activities, Bōtō was imprisoned on a remote island until her comrades rescued her in a dramatic jailbreak, spiriting her away under gunfire. Roger K. Thomas examines Bōtō's life, writing, and legacy, and provides annotated translations of two of her literary diaries, shedding light on life and society in Japan's tumultuous bakumatsu period and challenging preconceptions about women's roles in the era.

Thomas interweaves analysis of Bōtō's poetry and diaries with the history of her life and activism, examining their interrelationship and revealing how she brought two worlds--the poetic and the political--together. Counting Dreams illustrates Bōtō's significant role in the loyalist movement, depicting the adventurous life of a complex woman in Japan on the cusp of the Meiji Restoration.

Roger K. Thomas is Professor in the Department of Languages, Literatures, and Cultures at Illinois State University.