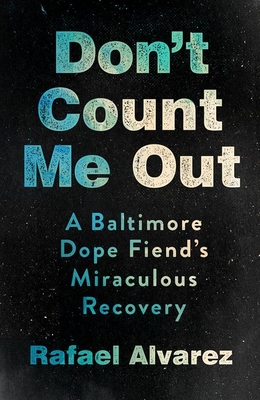 Don't Count Me Out chronicles the life of Bruce White from the beginning of his drug use in elementary school through criminal acts fueled by his need for drugs, to his miraculous recovery three decades later and involvement in the treatment of addicts, where he is now a leader in the rehabilitation field.

Rafael Alvarez's recounting of White's journey should inspire those dealing with the fallout of addiction. Alvarez, a journalist and screenwriter, allows the reader to get inside the head of an addict who was stealing alcohol from his parents at the age of nine, selling drugs and tripping on LSD and PCP by the time he hit seventh grade, and hooked on morphine before he turned fifteen. "Bruce White? I thought he was dead?" is a response encountered in many of the interviews Alvarez conducted.

Don't Count Me Out shines a spotlight on an improbable and stunning miracle. Though this is just one person's story, the contributing factors of early sexual assault, the role of permissive preoccupied parents, and the need for peer approval, among others, will resonate with many as the opioid crisis continues to haunt us.

Rafael Alvarez is a former City Desk reporter for the Baltimore Sun and former writer for the HBO drama, The Wire. He is the author of many books of fiction and nonfiction.