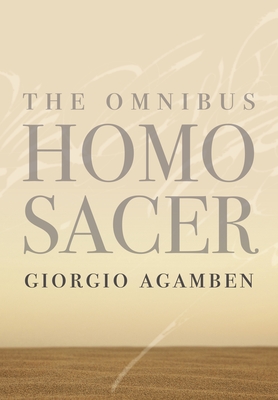 Giorgio Agamben's Homo Sacer is one of the seminal works of political philosophy in recent decades. A twenty-year undertaking, this project is a series of interconnected investigations of staggering ambition and scope investigating the deepest foundations of every major Western institution and discourse.

This single book brings together for the first time all nine volumes that make up this groundbreaking project. Each volume takes a seemingly obscure and outdated issue as its starting point--an enigmatic figure in Roman law, or medieval debates about God's management of creation, or theories about the origin of the oath--but is always guided by questions with urgent contemporary relevance.

2.3.The Sacrament of Language: An Archeology of the Oath

2.4.The Kingdom and the Glory: For a Theological Genealogy of Economy and Glory

2.5.Opus Dei: An Archeology of Duty

3.Remnants of Auschwitz: The Witness and the Archive

Giorgio Agamben is a contemporary Italian philosopher and political theorist whose works have been translated into numerous languages.