The Last Years of Karl Marx: An Intellectual Biography (Paperback) 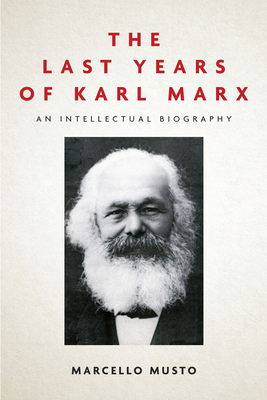 The Last Years of Karl Marx: An Intellectual Biography (Paperback)

An innovative reassessment of the last writings and final years of Karl Marx.

In the last years of his life, Karl Marx expanded his research in new directions--studying recent anthropological discoveries, analyzing communal forms of ownership in precapitalist societies, supporting the populist movement in Russia, and expressing critiques of colonial oppression in India, Ireland, Algeria, and Egypt. Between 1881 and 1883, he also traveled beyond Europe for the first and only time. Focusing on these last years of Marx's life, this book dispels two key misrepresentations of his work: that Marx ceased to write late in life, and that he was a Eurocentric and economic thinker fixated on class conflict alone.

With The Last Years of Karl Marx, Marcello Musto claims a renewed relevance for the late work of Marx, highlighting unpublished or previously neglected writings, many of which remain unavailable in English. Readers are invited to reconsider Marx's critique of European colonialism, his ideas on non-Western societies, and his theories on the possibility of revolution in noncapitalist countries. From Marx's late manuscripts, notebooks, and letters emerge an author markedly different from the one represented by many of his contemporary critics and followers alike. As Marx currently experiences a significant rediscovery, this volume fills a gap in the popularly accepted biography and suggests an innovative reassessment of some of his key concepts.

Marcello Musto is Associate Professor of Sociology at York University. His most recent books are Another Marx: Early Manuscripts to the International (2018) and, as editor, The Marx Revival: Key Concepts and New Critical Interpretations (2020).