1368: China and the Making of the Modern World (Hardcover) 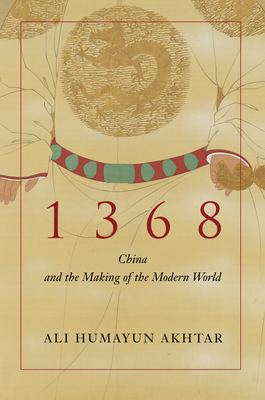 1368: China and the Making of the Modern World (Hardcover)

A new picture of China's rise since the Age of Exploration and its historical impact on the modern world.

The establishment of the Great Ming dynasty in 1368 was a monumental event in world history. A century before Columbus, Beijing sent a series of diplomatic missions across the South China Sea and Indian Ocean that paved the way for China's first modern global era. 1368 maps China's ascendance from the embassies of Admiral Zheng He to the arrival of European mariners and the shock of the Opium Wars. In Ali Humayun Akhtar's new picture of world history, China's current rise evokes an earlier epoch, one that sheds light on where Beijing is heading today.

But during the British Industrial Revolution, the rise of steam engines and factories allowed the export of the very commodities once imported from China. By the end of the Opium Wars and the arrival of Commodore Perry in Japan, Chinese and Japanese reformers called for their own industrial revolutions to propel them into the twentieth century.

What has the world learned from China since the Ming, and how did China reemerge in the 1970s as a manufacturing superpower? Akhtar's book provides much-needed context for understanding China's rise today and the future of its connections with both the West and a resurgent Asia.

Ali Humayun Akhtar is a global historian and Professor of Asian Studies at Bates College. He is the author of Philosophers, Sufis, and Caliphs: Politics and Authority from Cordoba to Cairo and Baghdad (2017).