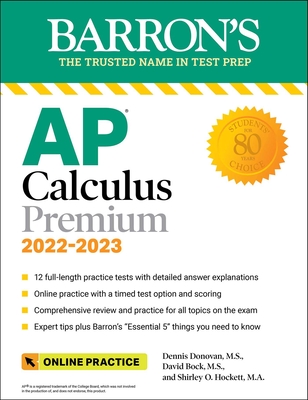 
On Our Shelves Now at:
Be prepared for exam day with Barron’s. Trusted content from AP experts!

Barron’s AP Calculus Premium: 2022-2023 includes in-depth content review and online practice for the AB and BC exams. It’s the only book you’ll need to be prepared for exam day.

Be Confident on Exam Day

About the Authors
Dennis Donovan, M.S. (Westwood, Massachusetts) has been a math teacher at Xaverian Brothers High School for more than 25 years, teaching AP Calculus (both AB and BC) for more than 20 years. He has also served as both an AP Calculus Reader and one of nine national Question Leaders for the AP Calculus exam, led professional development workshops for math teachers as a College Board consultant, and worked as a T3 Regional Instructor for Texas Instruments.

David Bock, M.S. (Ithaca, New York) taught AP Calculus during his 35 years at Ithaca High School, was a mathematics instructor at several universities (including Cornell University and Ithaca College), and served for several years as an Exam Reader for the College Board. He currently leads workshops for AP teachers.

Shirley O. Hockett, M.A. (Ithaca, New York) taught mathematics for 45 years, first at Cornell University and later at Ithaca College, where she was named Professor Emerita. In addition to winning numerous awards and authoring six mathematics textbooks, she served as both an Exam Reader and a Table Leader for AP Calculus.

About the Publisher
In the 1930s, Manuel H. Barron opened a bookstore in Brooklyn, New York.

People from the community asked Mr. Barron about books that might be available to help their children study for the New York State Regents exams. After realizing there wasn't anything available, Mr. Barron created his own study guides.

80 years later, Barron's has helped millions of people prepare for their next step.