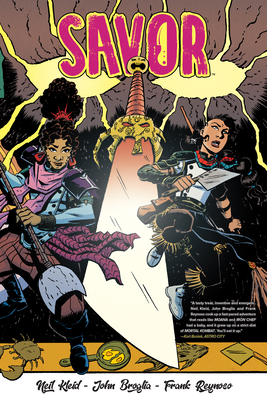 
Special Order—Subject to Availability
An adventuring chef must face five deadly restaurants, assemble the ultimate knife, and defeat a band of pirate cooks to save her island and the woman she loves.

Warrior chef Savor Batonnet has returned home, to the island of Earth's Oven, after years away. When she learns that a crew of demonic pirate cooks has captured both the island and her family, Savor has to take on her very first quest as a newly minted hero! But are being called a "hero" and a handful of skills all the ingredients she needs to face five deadly restaurants, forge the world's most powerful knife, save both her parents and the woman she loves?

Creators Neil Kleid (Brownsville, Kings and Canvas, Powers: The Secret History of Deena Pilgrim), John Broglia (God Complex, Zombie-Sama) and Frank Reynoso (Kings and Canvas, The Sweetness) serve up a bite-sized story about finding your way, food fighting, family, fun and adventure! Fans of video games and cooking competitions will enjoy this all ages graphic novel.
Xeric-Award winning graphic novelist Neil Kleid authored NINETY CANDLES, a graphic novella about life, death, legacy and comics, as well as BROWNSVILLE and THE BIG KAHN for NBM Publishing. He has written for nearly every publisher in the comic book industry, adapted Jack London's CALL OF THE WILD into sequentials for Penguin Books/Puffin Graphics, did the opposite for Marvel Comics' seminal Spider-Man storyline "Kraven's Last Hunt", and is co-authoring (with creator-writer Brian Michael Bendis) THE SECRET HISTORY OF DEENA PILGRIM, the first original prose novel set in the universe of Powers, the hit comic/TV show by Bendis and Michael Avon Oeming. Along with artists Jake Allen and Frank Reynoso, he authors KINGS AND CANVAS, a digital comic book series appearing on Comixology from Monkeybrain Publishing. By day, Neil is the Art Director for the Topps Company's digital suite of trading card apps. He lives in New Jersey with his wife and children, where he roots for the Tigers, grills like a king, writes like a champ.