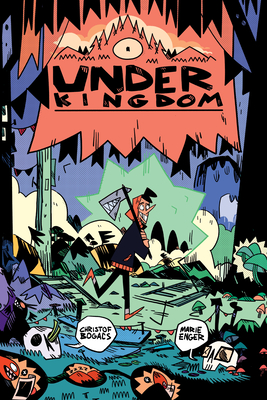 
Coming Soon—Pre-Order Now
School can be hard, and making friends can be even harder. Taking your mother’s place as the guardian of a secret subterranean kingdom of monsters just might be impossible!

After the sudden disappearance of his mom, high school freshman, Shay, is thrust into a secret world of monsters that exists underneath his small West-Virginian town. With the help of his shapeshifting aunt Sa’Belle, he must search for his mother while doing what he can to safeguard the citizens of the ‘Under Kingdom’ and try to maintain his normal high school life. If that wasn’t enough, Shay’s no fighter but the Under Kingdom demands he take arms to protect his friends and family. Shay struggles to balance school, his new crush, and training to become a warrior. When an army of Dwarves declare war on the Under Kingdom, he will need to find a way to balance who he is with protecting all of monster-kind from war.

An epic adventure set in a colorful world full of mischievous sock-stealing imps, adorable dragons, rowdy orcs, and an endless variety of other strange creatures. Join Shay, Sa’belle, and friends in this heartwarming tale where kindness is proven more powerful than violence.
Christof Bogacs is a comics and video game writer from Sydney, Australia. He delights in telling stories that feature optimism, heart and as many bad jokes as he can cram in. He is the author behind Earth to Chris Cleevy (HarperAlley) slated for release in 2024 and VOLUME (Scout Comics) an upcoming YA mini-series. His work has been featured in anthologies from Image, Gestalt Comics, Blueprint Comics and A Wave Blue World. Under Kingdom will be his debut graphic novel.

Marie Enger is a cartoonist and illustrator based outta StL, MO, USA.
Half the time they’re drawin’ creeps and if they’re not drawin’
creeps, they’re drawin’ weirdos. They're the cartoonist behind
CONTROLLED BURN (Random House Graphics, 2024), the art-half of the
WHERE BLACK STARS RISE (Tor Nightfire, 2023) creative team, and the
creator of the dark occult western tabletop rpg CASKET LAND. They've had stories featured in CORRIDOR, RAZORBLADES, and DAGGER DAGGER, but Under Kingdom ain't scary. PROMISE.