The Beast Side: Living and Dying While Black in America (Paperback) 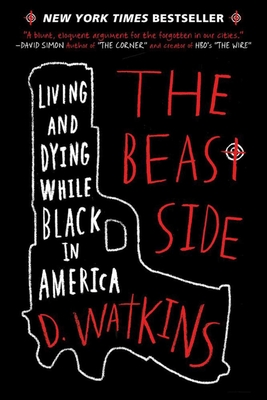 The Beast Side: Living and Dying While Black in America (Paperback)


In Stock—Click for Locations
A New York Times Best Seller! Baltimore, one of our country’s quintessential urban war zones, is brought powerfully to life by literary talent, D. Watkins

To many, the past 8 years under President Obama were meant to usher in a new post-racial American political era, dissolving the divisions of the past. However, when seventeen-year-old Trayvon Martin was shot by a wannabe cop in Florida; and then Ferguson, Missouri, happened; and then South Carolina hit the headlines; and then Baltimore blew up, it was hard to find any evidence of a new post-racial order.

Suddenly the entire country seemed to be awakened to a stark fact: African American men are in danger in America. This has only become clearer as groups like Black Lives Matter continue to draw attention to this reality daily not only online but also in the streets of our nation’s embattled cities.

D. Watkins. fought his way up on the eastside (the “beastside”) of Baltimore, Maryland—or “Bodymore, Murderland,” as his friends call it. He writes openly and unapologetically about what it took to survive life on the streets while the casualties piled up around him, including his own brother. Watkins pushed drugs to pay his way through school, staying one step ahead of murderous business rivals and equally predatory lawmen. When black residents of Baltimore finally decided they had had enough—after the brutal killing of twenty-five-year-old Freddie Gray while in police custody—Watkins was on the streets as the city erupted. He writes about his bleeding city with the razor-sharp insights of someone who bleeds along with it. Here are true dispatches from the other side of America.

In this new paperback edition, the author has also added new material in a section title "Bonus Tracks", responding to the rising tide of racial resentment and hate embodied by political figures like Donald Trump and Ted Cruz as well as the heartbreaking killings of Alton Sterling and Philando Castile, and the impact this has had on issues of race in America. This book is essential reading for anyone trying to make sense of the chaos of our current political moment.
David Talbot is the New York Times bestselling author of Brothers: The Hidden History of the Kennedy Years and The Devil’s Chessboard. He is the founder and former editor-in-chief of Salon and has written for the New Yorker, Rolling Stone, and Time. He lives in San Francisco.