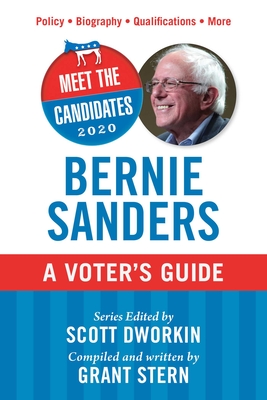 
Special Order—Subject to Availability
What is “democratic socialism?" Why is Bernie Sanders a leading candidate for the 2020 Democratic nomination? Educate yourself on Sanders, the liberal independent from Vermont and the 2016 underdog turned 2020 Democratic favorite.

Bernie Sanders shocked the establishment in 2016 with his self-described “political revolution,” mobilizing grassroots fundraising and campaigning to nearly secure the Democratic nomination over Hillary Clinton (even in the face of Democratic National Convention opposition). The Vermont senator and longest-serving independent in congressional history hopes to do the same with a better result in 2020. Meet the Candidates 2020: Bernie Sanders: A Voter’s Guide will help you decide if Sanders’s brand of democratic socialism is for you and if he is the right candidate to take on Donald Trump.

A vocal critic of Donald Trump, Sanders advocates for sweeping reform: single-payer, universal health care, labor and economic inequality reform, taxes on the wealthy, the Green New Deal, marijuana legalization, free higher education. Sanders has had an undeniable influence on how campaigns are run and has moved the Democratic party to the left, but how will his liberal platforms play in a Democratic primary and against Trump in a general election? After reading Meet the Candidates 2020: Bernie Sanders: A Voter’s Guide you’ll be able to analyze those chances, explain his positions, and decide if they are what you believe is right for America.

The Meet the Candidates 2020 series is the informed voter’s guide to making a decision in the 2020 Democratic primary and presidential election. Each book gives an unbiased, political insider’s analysis of each contender, featuring: candidate interviews; an introduction by campaign advisor, Democratic Coalition co-founder, and Dworkin Report host Scott Dworkin; and compilation and writing by Occupy Democrats Editor at Large Grant Stern. In two hours of reading, you’ll understand their defining characteristics, credentials, campaign issues, challenges, presidential chances, and everything else you need to know to decide who should challenge Donald Trump. Whether it’s for Elizabeth Warren, Joe Biden, Bernie Sanders, Kamala Harris, Julian Castro, Cory Booker, or another, Meet the Candidates is what you need to make an informed vote for president in 2020.
Scott Dworkin is the co-founder and lead investigator of the Democratic Coalition in addition to his duties hosting the Dworkin Report podcast. His 2016 Dworkin Report helped uncover the Trump-Russia affair well before Special Counsel Mueller’s probe began. He served as a deputy director for both the 2009 Presidential Inaugural Committee and 2012 Democratic National Convention and was a senior advisor on both the Draft Biden and Run Warren Run campaigns. He has worked on campaigns and with organizations in all 50 states and was named to the Campaigns & Elections magazine’s 2011 class of Rising Stars. Find him at DworkinReport.com, scottdworkin.org, and on Twitter @funder.