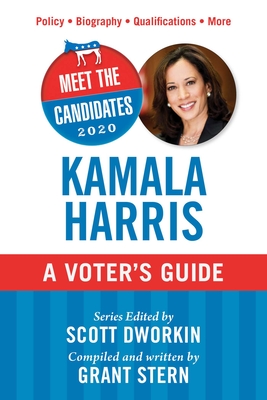 
Special Order—Subject to Availability
Kamala Harris is a serious contender to take on Donald Trump in the 2020 Presidential election. Learn what makes the lawyer, legislator, and progressive Democrat a strong candidate.

Meet the Candidates 2020: Kamala Harris: A Voter’s Guide is your handbook to understanding the candidacy of Kamala Harris and deciding if she deserves your vote in the Democratic primary, and ultimately to take on Donald Trump in the 2020 presidential election.

The senator, former prosecutor, and attorney general from California has gained momentum after a strong national showing at the Kavanaugh hearings. She is a strong voice in the Senate, and serves on the Homeland Security and Governmental Affairs Committee, the Select Committee on Intelligence, the Committee on the Judiciary, and the Committee on the Budget. While she is still refining her campaign stances, she has voiced support for gun control, the Green New Deal, lowering middle class taxes, DREAMers, net neutrality, and legalizing marijuana. Meet the Candidates 2020: Kamala Harris: A Voter’s Guide examines how her campaign will solidify, the type of leader she’ll be, and her chances versus Donald Trump in the general election.