The Big Book of American Presidents: Fascinating Facts and True Stories about U.S. Presidents and Their Families (Paperback) 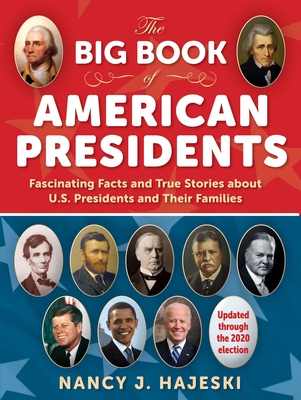 The Big Book of American Presidents: Fascinating Facts and True Stories about U.S. Presidents and Their Families (Paperback)


Not On Our Shelves—Ships in 1-5 Days
The Big Book of American President Trivia illustrates each president’s journey to the White House through facts, anecdotes, illustrations, photographs, inspirational quotes, and more!

The president has been the figurehead of the United States since the time when our country was a small band of thirteen fledgling colonies until its current position as a world superpower. The forty-five leaders of our nation have had fascinating, exciting, and sometimes scandalous lives. Find out which president had a faithful dog named Fala, who was the only unmarried president, and which president’s daughter carried around her pet snake in the White House in this fun and fascinating overview of our country’s leaders.

Bestselling author Nancy J. Hajeski not only provides engaging information about each president, but also includes timelines of US and world events that place each president’s term in office in a historical context. She also provides useful facts about the White House, Congress, the Supreme Court, presidential assassinations, the first ladies, the vice presidents, and more to help broaden kids’ understanding of our government and the president’s role within in.

With updated information on President Barack Obama, as well as Donald J. Trump, this is the perfect introduction to the lives and characters of the US presidents.
Nancy J. Hajeski is a New York Times bestselling author who has written young adult nonfiction, romantic fiction, and graphic novel adaptations, and has edited a number of fiction anthologies. She is a human-interest columnist and works out of the Catskill Mountains. She lives in Roscoe, New York.
"Learn about the presidents of the United States with this informative read! Accompanied by historical and fun facts, this book is a great introduction to U.S. presidents." —First 5 LA.org