5,000 Laugh-Out-Loud Jokes and One-Liners: The Most Comprehensive Collection of Gut-Busting Humor Around! (Paperback) 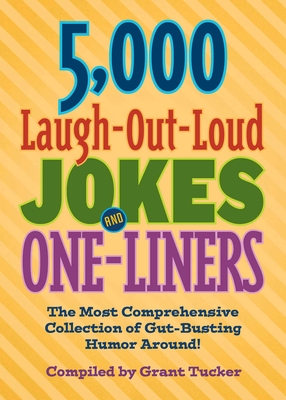 5,000 Laugh-Out-Loud Jokes and One-Liners: The Most Comprehensive Collection of Gut-Busting Humor Around! (Paperback)

By Grant Tucker (Compiled by)


Special Order—Subject to Availability
Thousands of jokes and zingers to expand your repertoire and become a master of comedy!

Bringing together some of the funniest, wittiest, and most cutting jokes the world over, Grant Tucker’s volume is the definitive collection of the quips comedians call “one-liners.” Short, sweet, and undeniably clever, one-liners hold a special place in the history of comedy, and the rise of Twitter and social media seems to have ushered in a new era of this comedic art form. With most people expressing themselves in 140 characters or less, there seems no better time to celebrate Grant’s collection and the immortal one-liner.

Side-splittingly funny, 5,000 Sidesplitting Jokes and One-Liners has all the puns, zingers, and witty remarks you could ever ask for—and many you’d never dream of asking for.

Grant Tucker is the author of many books, including 5,000 Sidesplitting Jokes and One-Liners and The Margaret Thatcher Book of Quotations. He is a former Coleg Gwent student and works as an assistant PA to LBC radio presenter and publisher Iain Dale in London, England.