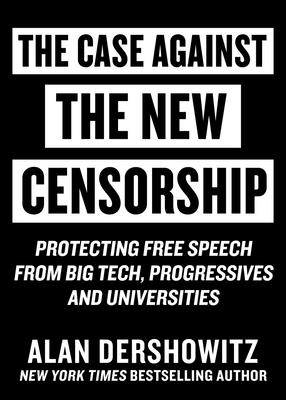 
Not On Our Shelves—Ships in 1-5 Days
In The Case Against the New Censorship: Protecting Free Speech from Big Tech, Progressives, and Universities​, Alan Dershowitz—New York Times bestselling author and one of America’s most respected legal scholars—analyzes the current regressive war against freedom of speech being waged by well-meaning but dangerous censors and proposes steps that can be taken to defend, reclaim, and strengthen freedom of speech and other basic liberties that are under attack.

Alan Dershowitz has been called “one of the most prominent and consistent defenders of civil liberties in America” by Politico and “the nation’s most peripatetic civil liberties lawyer and one of its most distinguished defenders of individual rights” by Newsweek. He is also a fair-minded and even-handed expert on the Constitution and our civil liberties, and in this book offers his knowledge and insight to help readers understand the war being waged against free speech by the ostensibly well-meaning forces seeking to constrain this basic right.

The Case Against the New Censorship is an analysis of every aspect of the current fight against freedom of speech, from the cancellations and deplatformings practiced by so-called progressives, to the powerful, seemingly arbitrary control exerted by Big Tech and social media companies, to the stifling of debate and controversial thinking at public and private universities. It assesses the role of the Trump presidency in energizing this backlash against basic liberties and puts it into a broader historical context as it examines how anti-Trump zealots weaponized, distorted, and weakened constitutional protections in an effort to “get” Trump by any means.

In the end, The Case Against the New Censorship represents an icon in American law and politics exploring the current rapidly changing attitudes toward the value of free speech and assessing potential ways to preserve our civil liberties. It is essential reading for anyone interested in or concerned about freedom of speech and the efforts to constrain it, the possible effects this could have on our society, and the significance of both freedom of speech and the battle against it in a greater historical and political context.

Alan Dershowitz is one of the most celebrated lawyers in the world. He was the youngest full professor in Harvard Law School history, where he is now the Felix Frankfurter Professor of Law, Emeritus. The author of numerous bestselling books, from Chutzpah to Guilt by Accusation to The Case Against Impeaching Trump to The Best Defense to Reversal of Fortune (which was made into an Academy Award–winning film) to Defending Israel, Dershowitz has advised presidents and prime ministers and has represented many prominent men and women, half of them pro bono.
PRAISE FOR ALAN DERSHOWITZ

"The Case Against the New Censorship is a book well worth reading and pondering."—Harvey Silverglate

“Alan Dershowitz is a living profile in courage.” —Steve Forbes

“The truth has no greater defender than Alan Dershowitz.”—Benjamin Netanyahu

“There are great legal minds; there are those who can also communicate well on television; then there is Dershowitz. The professor is uniquely capable of arguing a position, while putting a premium on legal and ethical legitimacy, not its popularity. Bravo, Dershowitz!”—Chris Cuomo, Anchor and Reporter, Cnn

“Anyone interested in the true merits of criminal law and very fine writing must read Alan Dershowitz’s book.”—Truman Capote

“Love him or hate him, Dershowitz has lived a life that matters, hugely and enduringly. He is a man in full at a time when most of us aspire to be little more than a presence on Twitter.”—New York Times Book Review

“Courage and principle are rare today. Professor Dershowitz has them both.”—Senator Ted Cruz

"Alan Dershowitz's commitment to free speech, fundamental fairness, and an open culture of freedom of expression has made him the scourge of both censors and double standards. He understands deeply that those who seek to silence others, either through governmental acts or a revival of McCarthy-era blacklists, are removing the protections of liberty on which all of us depend for our future freedom."—Alan Charles Kors, Henry Charles Lea Professor Emeritus of History, University of Pennsylvania
"Alan Dershowitz has been the most prominent First Amendment absolutist since the death of Justice Hugo Black in 1971. Defending speech that he disagrees with, and speakers whose views he abhors, is for Dershowitz not just a theoretical construct; it is a life passion. He understands, as few do today, that ceding to the government the power to censor "bad" speech will quickly devolve into censorship of all speech those in power disagree with, destroying democracy as we know it. This book is a timely warning from the last great defender of Free Speech in America that we are well on the way to that unhappy result. We ignore it at our peril."—Alex Kozinski, Chief Judge of the Ninth Circuit Emeritus (Retired)